Exports and Imports Performance of India

The data table highlights the following facts about India’s Exports since 1990’s:

The data table highlights the following facts about India’s imports since 1990’s:

What Caused the fall in India’s Exports in Recent Years

India’s goods exports had remained stagnant over the years. After recovering from Global Financial Crisis of 2008, India’s exports had reached a peak of USD 310 billion in the year 2011.

The successive years have shown stagnant exports till the year 2014. Post-2014, India’s goods exports have collapsed sharply and reached at USD 267 billion and USD 264 billion in the year 2015 and 2016 respectively.

The reason for the collapse of India’s exports are as follows: 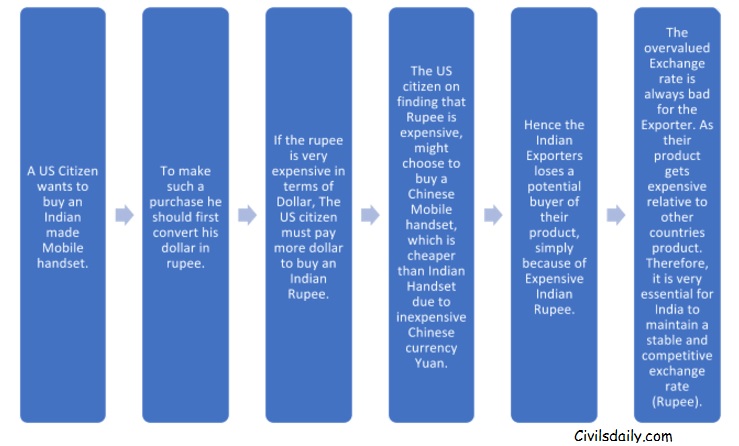 FDI in India is allowed under two major routes; Automatic Route (Without the approval of Government or RBI) and Government Route (requiring Government approval).

How Beneficial is FDI for Developing Countries like India?

FDI has proved to be a stable and important source of capital for the developing countries like India. FDI flows were quite consistent and stable in East Asian Countries even during the Asian Financial Crisis of 1997-98. In sharp contrast to FDI, the other forms of foreign investment like Portfolio Investments, equity flows and debt flows were subject to huge reversals during the same period. The consistency of FDI was also evident during the Latin American Crisis of 1980s.

The short-term capital or hot money flows poses many risks in developing countries as they are driven mainly by speculative actions based on interest rate or exchange rate differentials. there movements are only for short-term and leaves the host country as the first signs of trouble appears, thus can damage the host economy, thus they are considered as ‘Bad Cholesterol’.

In contrast FDI is considered as “Good Cholesterol” because it offers a lot of benefits as mentioned above. FDI cannot leave so easily at the first time of trouble, instead it provides a cushion to absorb the shock.

Reasons for Caution in Dealing with FDI

Despite the above-mentioned arguments developing countries should be a little cautious about taking a too uncritical attitude towards FDI.

Sir/Ma’am, Can you please provide the Date of publishing of the article, since it matters a lot with fast changing policies.

Good insights from the above article. Recent changes in FDI norms need to be incorporated.