Agriculture and the Indian Economy:

“It is in the agriculture sector that the battle for long term economic development will be won or lost.”- Gunnar Myrdal

Before we study this important sector, let’s look at some basic terms and statistics:

The Reporting area stands for the area for which data on land use classification are available. As per the land use statistics 2012-13, the total reporting area is 305.9 million hectares. [Difference between the total geographical area and reporting area is on account of mapping issues due to difficult terrain + disputed land between India-Pak & India- China]

This represents the total area sown with crops and orchards. The area sown more than once in the same year is counted only once.

This represents the total area sown once and/or more than once in a particular year, i.e. the area is counted as many times as there are sowings in a year. This total area is also known as total cropped area or total area sown.

It is the ratio of the Total Cropped Area (or the gross cropped area) to the Net Area Sown.

Therefore, more the use of arable land during a year more is the cropping intensity. Cropping Intensity depends on a number of factors:

Fallow land includes the land out of cultivation for one to five years.

It includes the areas which can be brought under cultivation by efforts. 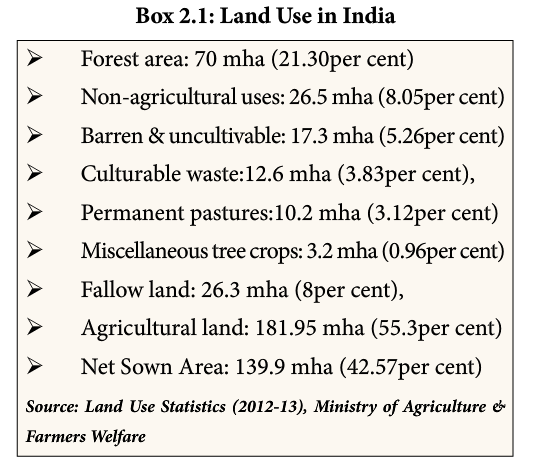 Agriculture is an age-old economic activity in our country. Over the years, cultivation methods have changed quite significantly depending on the above-mentioned factors. Farming varies from subsistence to commercial type.

Following are the 8 major farming systems practised in India:

To read about these farming systems in detail, click here!

Variations in the physical environment and preferences for various types of food in India have resulted in a large number of crops being grown. In the next article, we will look at the chief crops grown in India, the geographical conditions required for their growth and their important producing areas.

Pay special attention to the geographical conditions required for the growth of each crop (i.e. soils, temperature conditions, rainfall requirements etc). Correlate these with the climatic regions and soil distribution in India (as discussed in the previous articles). It would help in memorization of the important producing areas and other details.

Thanks for the notes.
One question to all the readers, which state in India is the largest producer of coal as of 2019/2020?
In some website I find the answer as jarkhand and in another website I also find chhatisgarh as the answer. Please help. Thank you.

Alex Will
Reply to  CD Staff