How to use this study plan?

1. Polity is not about memorisation. Only a few things which have been covered in Dr V’s Tit-bits need to be memorised. For the rest, Read-Revise-Solve!
2. Try to relate the setup at the Centre and the state and especially note their differences
3. Issues/terms frequently in news like Office of Profit, Uniform Civil Code etc should be made note of.
4. The various committees and their recommendations are very important eg the Sarkaria and Punchii Commissions, the 2nd ARC, etc
5. Concentrate on the sections which have been made bold. These are UPSC’s favourite areas. This is simply because these are also important lynchpins of our polity. Know this – what is important for India’s polity is important for UPSC’s question setting 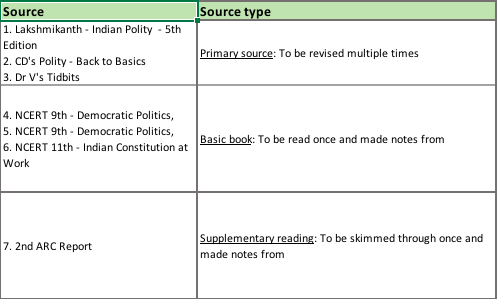 These are made keeping the Civil Services Exam in mind and therefore are tailor-made for your needs. Do Supplement with Current Affairs from CD’s news cards and stories.

To be read once and made notes from

This is important to develop a basic understanding of Indian Polity.

To be skimmed through once and made notes from

• Focus on developing a conceptual understanding of India as a democratic and constitutional polity and a parliamentary form of govt
• What are its characteristics, why were they so chosen, what are their advantages and limitations

• Historical background – Give importance to Acts – post-1857, when British Crown assumed sovereignty over India from the East India Company.
• Trace how an act/charter helped create a basic framework for the governance during the British rule. eg Indian-Councils Act, 1909 introduced direct elections for the first time
• Making of the Constitution – Context in which the Constituent Assembly was framed. eg role of Cripps Mission
• Composition and role of the Constituent Assembly and its criticism

Emergency Provisions
• Different kinds of Emergency – their procedure and time duration for approval and revocation
• Changes brought about by 42nd and 44th Amendment Act w.r.t Emergency
• Impact on the distribution of legislative, Executive and Financial Powers & on Fundamental rights (Article 358 and Article 359) when Emergency is in force
Criticism/misuse of emergency powers by the Central Government

1. The distribution of powers between the Centre and the States in the Indian Constitution is based on the scheme provided in the
(a) Morley-Minto Reforms, 1909
(b) Montagu-Chelmsford Act, 1919
(c) Government of India Act, 1935
(d) Indian Independence Act, 1947

Tikdam – Straight-forward. you know it or you don’t

2. To uphold and protect the Sovereignty, Unity and Integrity of India is a provision made in the
a) Preamble of the Constitution
b) Directive Principles of State Policy
c) Fundamental Rights
d) Fundamental Duties

Tikdam: it’s clearly not a right or directive. it’s duty so fundamental duty

3. The idea of ‘Welfare State’ in the Indian Constitution is enshrined in its
a) Preamble
b) Directive Principles of State Policy
c) Fundamental Rights
d) Seventh Schedule

In a welfare State, the functions of the State are not only the defence of the country or administration of justice or maintaining law and order but it extends to regulating and controlling the activities of the people in almost every sphere—educational, commercial, social, economic, political and even marital.
DPSP thus promotes the idea of a welfare state as it guides the state in making policies for the socio-economic well being of the people of India. Preamble, option A, will NOT be the answer because it simply lists the socio-economic objectives of Indian society. It does not tell us who will design or execute policies based on the objectives.

Union and its Territory
• Article 1, Article 2, Article 3 and Article 4 – Difference between them
• Understand the difference between ‘Union of India’ & ‘Territory of India’
• Parliament’s power to reorganize State.
• Different Commissions set-up for Reorganization of States – DHAR commission and JVP commission, Fazal Ali commission

Citizenship
• Constitutional Rights and Privileges of Citizens of India
• Acquisition and termination of citizenship
• Difference between a PIO, NRI, OCI
• Recent policies and schemes related to voting rights, refugee status and for PIOs, NRIs or OCI eg Visa on Arrival

Pay Attention to
• Need for FRs
• Their significance, implications and applications than just remembering all the articles. Understand the reason and target groups for the different FRs
• FRs available to only Indian citizens and those also to foreigners
• Difference between Fundamental rights and Rights secured by other provisions of the Constitution
• Different types of Writs (Article 32) and its scope
• The present position of Right to Property
Exceptional cases with regard to FR’s – Armed forces and when Martial Law is enforced

In India, if a religious sect/community is given “the status of a national minority, what special advantages it is entitled to?
1. It can establish and administer exclusive educational institutions.
2. The President of India automatically nominates a representative of the community to LokSabha.
3. It can derive benefits from the Prime Minister’s 15-Point Programme.
Which of the statements given above is/are correct?

President only nominates Anglo Indians and people of excellence in various fields. Eliminate 2 and get the answer.

DP’s
• Why have DPSPs
• Classification of DPSP- Socialistic, Gandhian, Liberal-Intellectual principles
• Justiciability & enforceability in court
• Comparison with Fundamental Rights,
• Conflicts between them – history of cases from Dorairajan case to Minerva Mills case (1980) and the present situation
• Significance of 42nd and 44th Amendment Act w.r.t DPSP

FD’s
• Committee recommendations like Swaran Singh, Verma Committee
• Enforcement of FD’s – is it justiciable or non-justiciable
• Significance and Criticism of FD’s

Consider the following statements regarding the Directive Principles of State Policy:

(1) The Principles spell out the socio-economic democracy in the country
(2) The provisions contained in these Principles are not enforceable by any court.
Which of the statements given above is/are correct?
a) 1 only
b) 2 only
c) Both 1 and 2
d) Neither 1 nor 2

Socio-economic democracy is spelt out because it provides for the idea of a welfare state. For e.g. consider Article 39 (b) and (c) which provide for minimizing inequalities in income and wealth, and ensuring that the wealth is not concentrated in the hands of few. While another article provides for the health of children, rights of working women etc.
DPSP is not enforceable by courts. Only Fundamental rights can be enforced by the courts.

Tikdam: Statement 2 any court is red flag but think of course they can’t be enforced in the court of law meaning in any court

So don’t mark a statement wrong just by seeing any.

Federal System
• Comparison between Unitary and Federal features; advantages and disadvantages
• Distribution of legislative, Executive and Financial Powers between the Union and the States – the 3 lists and residuary powers
• Principles behind distribution of Tax revenues
• Circumstances when Parliament can legislate on the State list subjects
• Finance – Role of Finance Commission (Statutory grants) and Planning Commission (Discretionary grants)
• Issues with the above two institutions – FC and PC
• Borrowing powers of the Union and the States from Market and Abroad
• Powers of Executive – giving directions to States
• All-India Services, UPSC
• Extra-Constitutional devices like Planning Commission/NITI, National Development Council, National integration Council etc.

Option A points to a democratic system. It does not necessarily mean a Parliamentary Democratic system. For e.g. in USA the Congress is also elected, but it is a Presidential Democracy.
Option D is correct because “Collective responsibility” of the council of ministers to the Lok Sabha (Article 75) lies at the heart of a Parliamentary democracy.
Tikdam: Parliamentary stystem meaning executive part of legislature and accountable to it as opposed to presidential where Executive is not part of legislature

If Rajya Sabha passes a resolution by a majority of not less than two-thirds of members present and voting saying that it is necessary or expedient in the national interest that Parliament should make a law on a matter enumerated in the State List, Parliament becomes empowered to make a law on the subject specified in the resolution, for the whole or any part of the territory of India. Such a resolution remains in force for a maximum period of one year but this period can be extended by one year at a time by passing a similar resolution further.
Tikdam: 1 of the 2 special powers of RS. Artice 249, other is art 312

Develop an understanding of
The differences between Prime Ministerial and Presidential form of Govt, their merits and de-merits.

Central Council of Ministers (COM)
• Understand the concept of collective responsibility, kitchen cabinet, etc
• Difference between COM’s and Cabinet Ministers
• Importance of 91st Amendment Act with regard to composition of COM
• Cabinet ministers, Cabinet Committees – their role and responsibilities

State Executive
• The ‘differences’ between institutions like Governor, CM & CoM w.r.t the Centre Govt
• The controversial nature in the ‘Appointment of Governor’
• Constitutional position of Governor
• The Governor’s powers, Executive, Judicial & Discretionary (Note the differences with the President’s functions)

Consider the following statements :
(1) The Executive Power of the Union of India is vested in the Prime Minister.
(2) The Prime Minister is the ex officio Chairman of the Civil Services Board.
Which of the statements given above is/are correct?
a) 1 only
b) 2 only
c) Both 1 and 2
d) Neither 1 nor 2

Executive power of the Union of India is vested in the President of India.
Cabinet Secretary is the ex-officio head of the Civil Services Board, the Cabinet Secretariat, the Indian Administrative Service (IAS) and head of all civil services under the rules of business of the Government of India.

This is the most important part in Polity from the exam’s perspective. The entire chapters are important!

Budget-
• Enactment of Budget, its significance
• Charged Expenditure
• Funds like Consolidated Fund, Contingency Fund, Public Accounts Fund – who authorizes them, what they contain
• Role of important institutions in the Parliament like Speaker and Chairman of Rajya Sabha – their election, removal/resignation, functions
• Role of Leader of opposition (LoP)
• Importance of Parliamentary Committees –Estimates Committee, Business Advisory Committee, Committee on Government Assurance – their composition, functions, and a general idea about the less significant committees like Rules Committee etc.

Tikdam: Bills lapse only on dissolution so 1st is wrong
2nd is correct as new LS can discuss the bill after it has been passed by RS.
Only a bill which is introduced and pending in RS does not lapse or joint sitting or reconsideration bill

A memory based question. Even if you can’t remember distinctly you can use the following reasoning.
The Law commission’s recommendations in any case are never binding – hence can have no role to change no. of judges. Similarly the CJI has been asking for expeditious appointments. Therefore he can’t increase posts either. That leaves us with A or B. But atleast you increased your chances to 50-50

• Focus on the need for their existence.
• The differences between states (in case of UTs) and areas (in case of Scheduled Areas)

“Option C is incorrect because it excludes the fifth and sixth schedule areas from the application of the Panchayati Raj system. This is to ensure that the local tribal practices, customs, religious laws, social and political institutions are not tampered with.
Instead, the act known as PESA, 1996 extends the panchayati raj system to the tribal areas.

• Focus on Composition, Powers and functions, Removal of the Constitutional bodies

• Focus on Composition, Functions, Working of the Non-Constitutional bodies

1. The minimum age prescribed for any person to be a member of Panchayat is 25 years.
2. A Panchayat reconstituted after premature dessolution continues only for the remainder period.
Which of the statements given above is/are correct?
a) 1 only
b) 2 only
c) Both 1 and 2
d) Neither 1 nor 2

With reference to the Delimitation Commission, consider the following statements :

1. The orders of the Delimitation Commission cannot be challenged in a Court of Law.
2. When the orders of the Delimitation Commission are laid before the LokSabha or State Legislative Assembly, they cannot effect any modifications in the orders.
Which of the statements given above is/are correct?
(a) 1 only
(b) 2 only
(c) Both 1 and 2
(d) Neither 1 nor 2

Which of the following bodies does not/do not find mention in the Constitution?
1. National Development Council
2. Planning Commission
3. Zonal Councils
Select the correct answer using the codes given below.
(a) 1 and 2 only
(b) 2 only
(c) 1 and 3 only
(d) 1, 2 and 3