One of the most important topics both from the point of view of prelims and mains.

India envisages A Three Stage Programme based on the optimum utilisation of the indigenous limited uranium and abundant thorium resources.  It was formulated by Dr. Homi Bhabha in the 1950s to secure the country’s long term energy independence.

The sequential 3-stage programme is based on a closed fuel cycle, where the spent fuel of one stage is reprocessed to produce fuel for the next stage.

The diagram below should explain that. 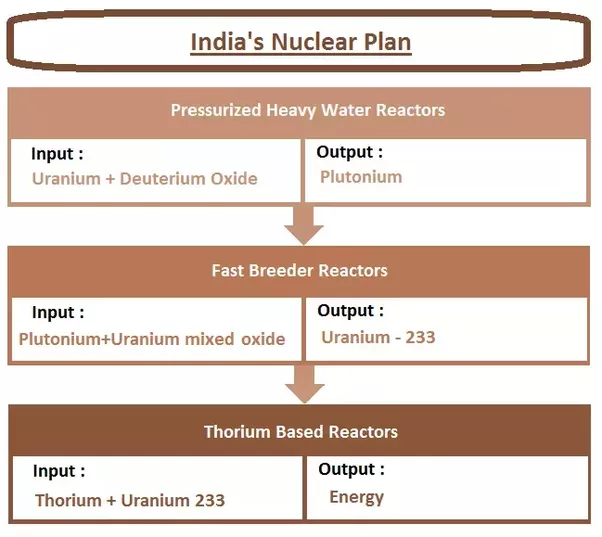 Working of the reactor – Two Russian-built VVER-1000 reactors have been in commercial operation in Kudankulam, southern India, since 2014 and 2017 respectively.

Working of the reactor – 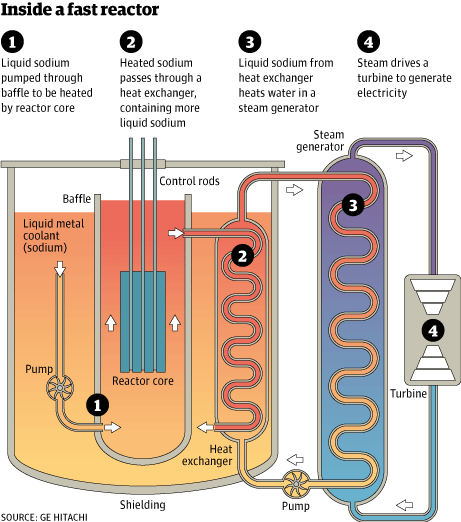 The multipurpose fast reactor project, known by the Russian acronym MBIR, is coming up at the International Research Centre in Dimitrovgrad located in the Ulyanovsk region in Russia.
It is a fast reactor project follows the closed fuel cycle.
Transitioning to closed fuel cycle which is based on fast neutron reactors can solve five essential problems:
safety, competitiveness, shortage of fuel, reprocessing and refabricating the used nuclear fuel and radioactive waste.
It also addresses the non-proliferation of fission materials and weapon technologies.

The main purpose of the MBIR is to conduct large no. of reactor studies of Generation-4 nuclear systems.
MBIR’s design includes three independent loops that can be used to test different coolants like gas, lead, molten salt and others.

KAMINI (Kalpakkam Mini reactor) in Kalpakkam is the world’s only thorium-based experimental reactor.  It achieved criticality on 1996. Designed and built jointly by the Bhabha Atomic Research Centre (BARC) and Indira Gandhi Centre for Atomic Research (IGCAR), it produces 30 KW[3] of thermal energy at full power.