Phases of Industrial Development in India 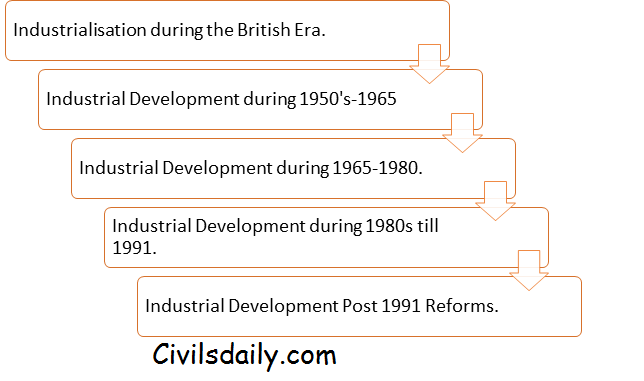 Industrialisation during the British Rule

The impact of British Policies and the Industrial Revolution led to the decay of Indian handicraft industry. Post-Industrial revolution in Britain, machine-made goods starting flooding into the Indian markets.

The decline of traditional handicraft was not followed by the rise of modern Industrialisation in India due to the British policy of encouraging the imports of British made goods and exports of raw materials from India.

The First Phase (1950-1965): Industrial Sector at the Time of Independence

The main features of the Indian Industrial sector on the eve of the Independence were:

As a result of these shortcomings, the national leadership reached on a consensus that economic sovereignty and economic independence lay in the rapid industrialisation including the development of Industrial Infrastructure.

The First Five-year Plan did not envisage any large-scale programs for industrialisation. The plan rather made an attempt to give a practical shape to the Indian economy by providing for the development of both private and public sector. A number of industries were set up in the public sector. Important among those were Hindustan Shipyard, Hindustan Tools, Integral Coach Factory etc.

The Second Five-Year plan accorded highest priority to Industrialisation. The plan was based on famous Mahalanobis Model. Mahalanobis model set out the task of establishing basic and capital goods industries on a large scale to create a strong base for the industrial development. The plan includes substantial investment in the Iron and Steel, Coal, Heavy engineering, Machine building, Heavy Chemicals and Cement Industries of basic importance.

As a result, the first Three Plans witnessed a strong acceleration in the growth rate of the Industrial production. The period witnessed an increase in growth rate from 5.7% to 7.2% and ultimately 9.0% in the first, second and third plans respectively.

The most important observation of the period was that the rate of growth of capital good industry considered as the backbone of modern industrialisation grew at 9.8%, 13.1% and 19% during the first, second and third plan respectively. 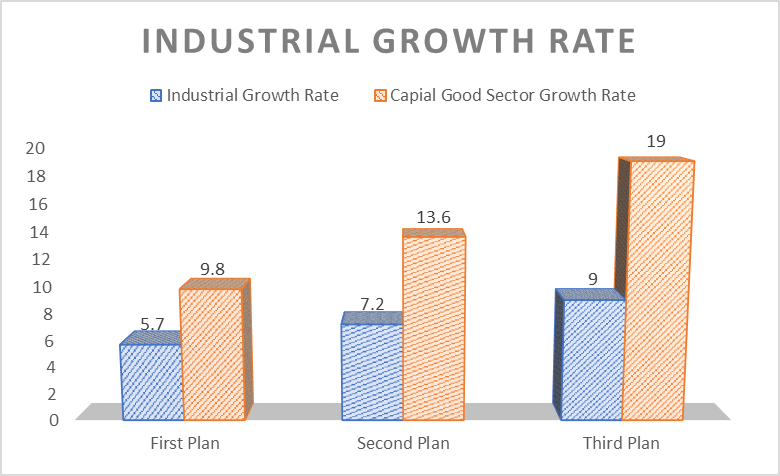 The Second Phase (1965-1980): The Period of Industrial Deceleration

production as well as of the overall economy.

The Wage Good Model: Prominent Economist like, C N Vakil and P R Brahmananda advocated Wage Good model for the development of the Indian economy and Industrialisation. Vakil and Brahamanda differed from the Mahalanobis strategy as they believe “At the low level of consumption (this was the situation in India) the productivity of the workers depends on how much they consumed. According to them, if people were undernourished, they will lose their productivity and become less efficient, at this juncture it is necessary to feed them to increase their productivity. But this is not true for all consumer good; so they differentiated between Wage Good (whose consumption increase worker productivity) and Non-Wage Good (whose consumption did not).

To sum up, Wage Good model says; worker’s productivity depends on not on whether they use machines to produce goods but also on the consumption of wage goods like, food, cloth and other basics. Therefore, the first step towards development is to mechanize agriculture and raise food production; once this objective is reached, one should go for Mahalanobis strategy of Heavy Industrialisation.

Anyway, Vakil and Bharmananda strategies were ignored and India launched heavy Industrialisation in the Second plan without mechanising agriculture. The result was failure of Mahalanobis Strategy and by 1965-66 India was hit by a severe food shortage crisis. Finally, in the wake of the crisis, the government adopted Bharamananda strategy of mechanizing agriculture sector and engineered green revolution. 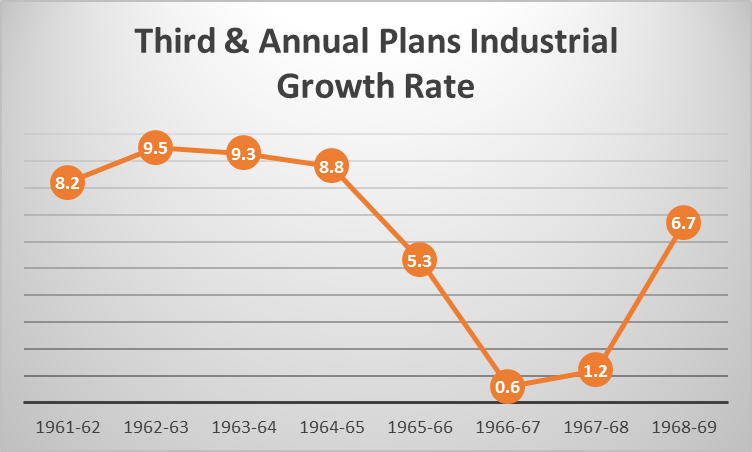 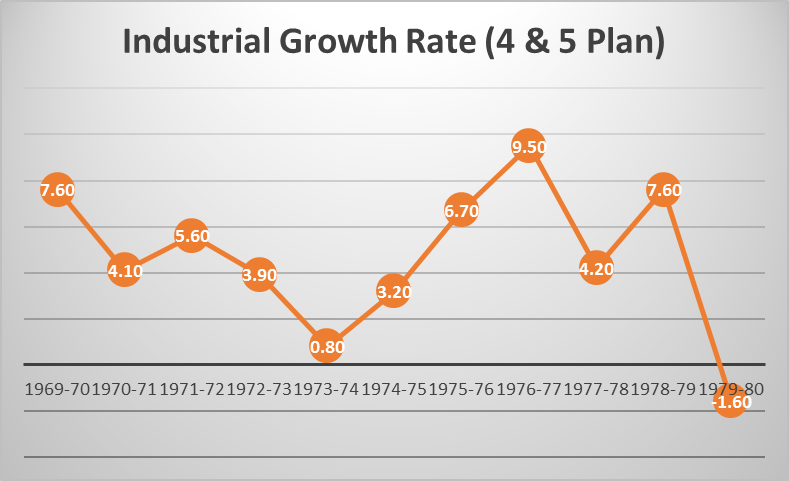 The period of 1965-80 is also marked as the period of structural retrogression, where the growth rate of the capital good sector and basic industries also fell.

Causes of Deceleration and Retrogression. 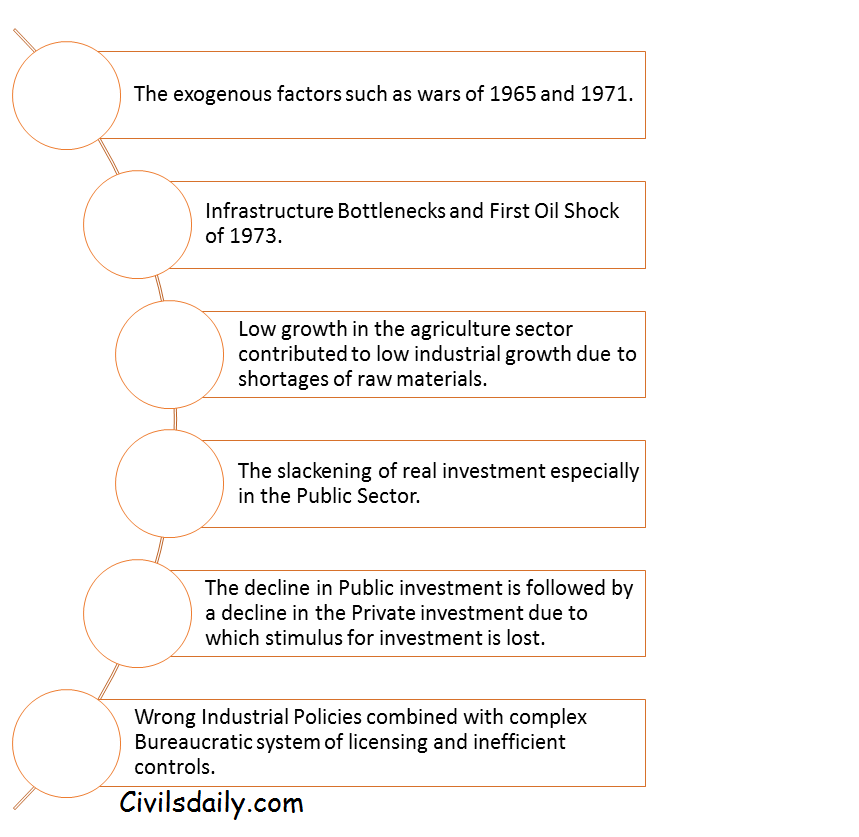 The period of the 1980s can be considered as the period of the Industrial recovery. The period saw a revival in the industrial growth rates. The period witnessed an industrial growth rate of more than 6 percent during the sixth plan and 8.5 percent during the seventh plan. The period was also marked by a significant recovery in the manufacturing and capital good sector. The most important observation from the revival of industrial sector was that the revival is closely associated with the increase in the productivity of Indian Industries. 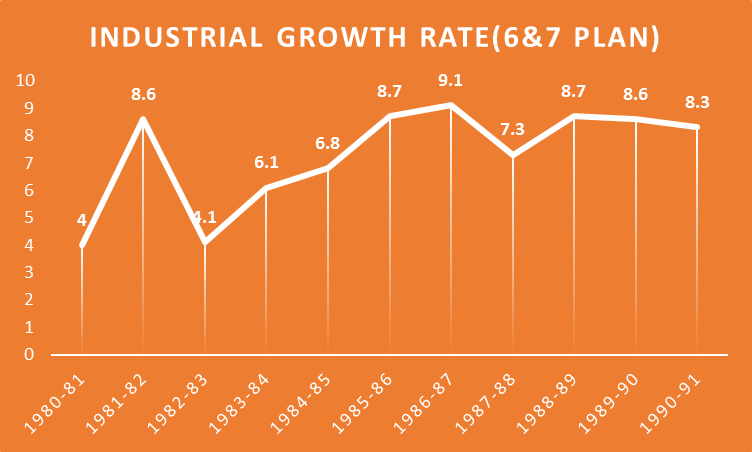 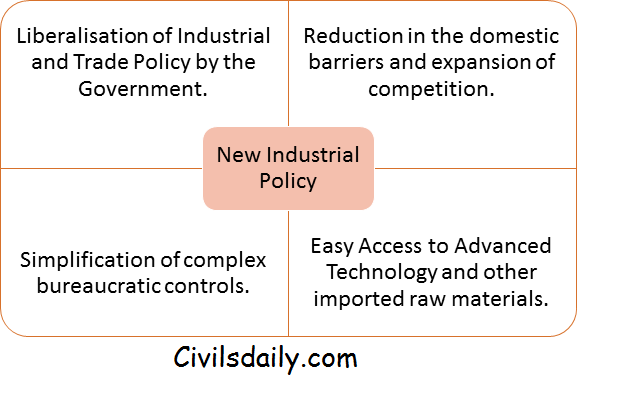 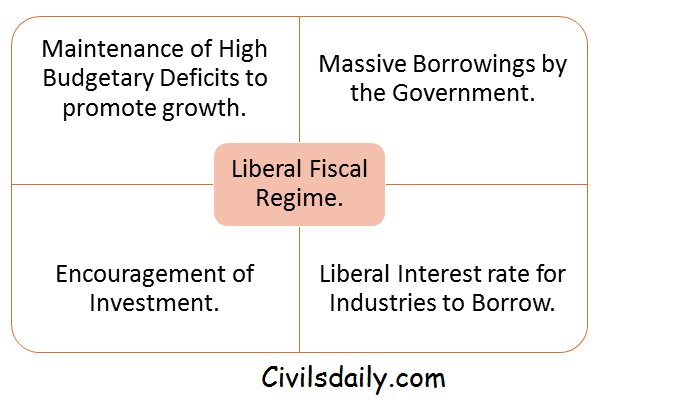 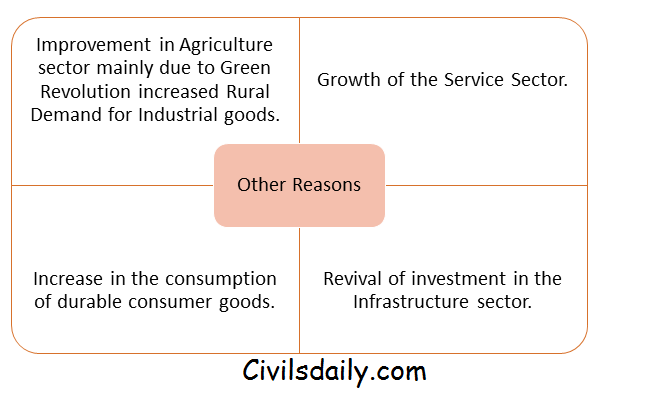 The year 1991 ushered a new era of economic liberalisation. India took major liberalisation decision to improve the performance of the industrial sector.

To analyse the impact of these reforms measures on the industrial growth, it is better to divide the period into two. 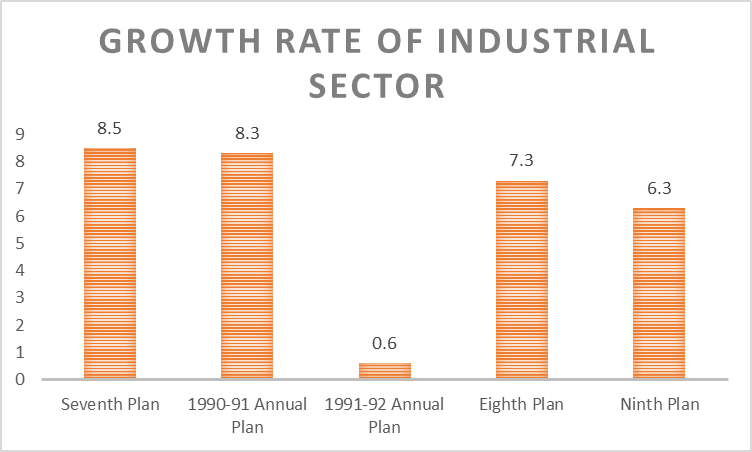 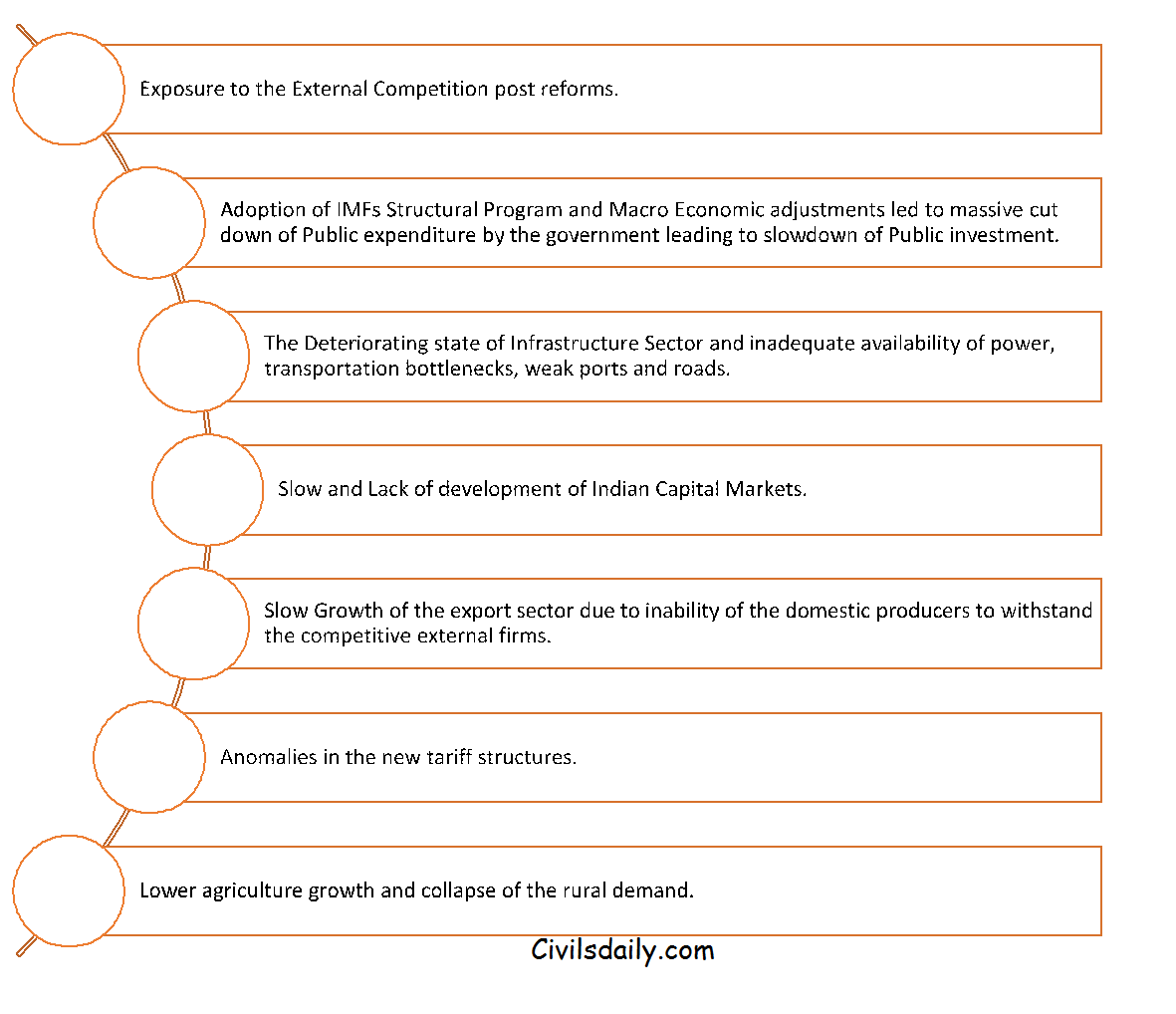 The period since the new millennium witnessed a sharp recovery and revival of the industrial sector. The tenth and eleventh plan witnessed a high growth rate of industrial production. 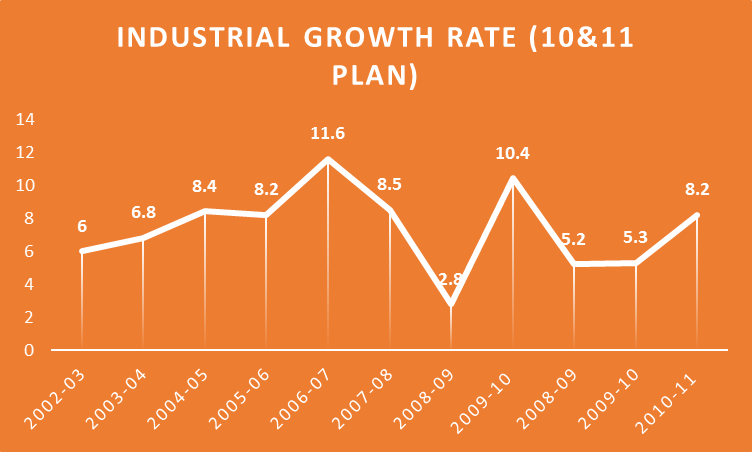 The growth in the Tenth plan was mainly driven by the manufacturing sector. The significant acceleration in the capital good sector was the significant contributor to the overall economic growth.

During the Eleventh Plan, the industrial growth witnessed a considerable degree of fluctuations. After growing at more than 8 percent, the growth collapsed to 2.8 percent in the year 2008-09. The main reason for the collapse was the Global Financial crisis that hit the World in the year 2008. 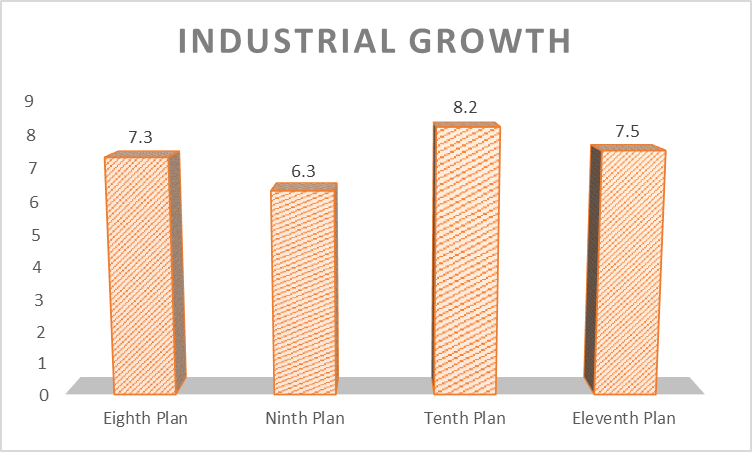 The period starting from 2011-12 saw a severe slowdown in the industrial growth and production. The slowdown during the period is due too. 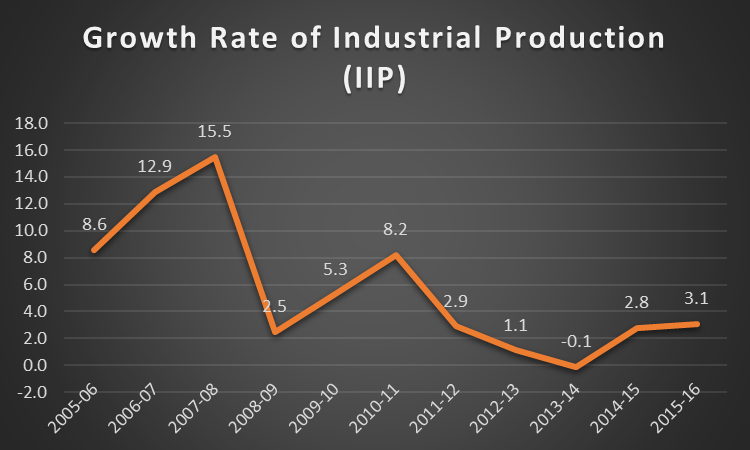 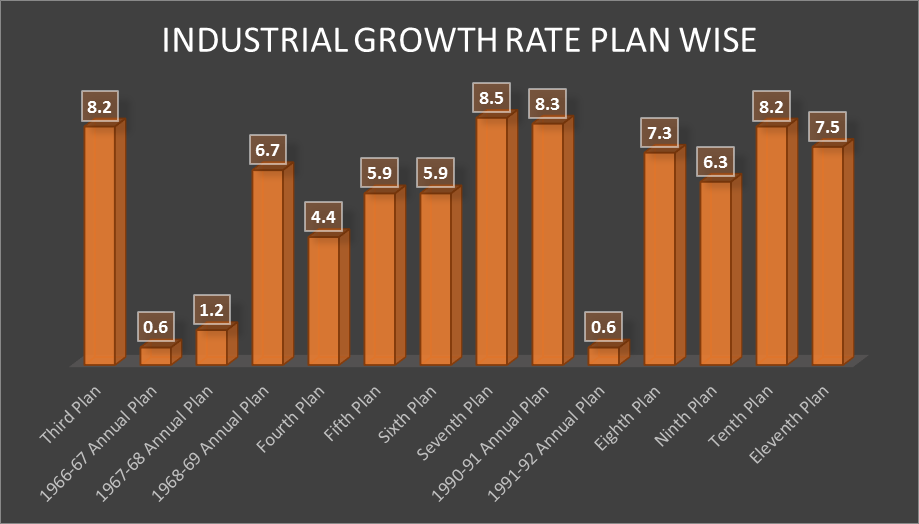