The question is basic and deserves the knowledge of history of constitutional development in India.

Britishers policies were very exploitative before 1858 as India was ruled by EIC directly. So EIC’s exploitative policies made the law and order situation worse in historical times. Plundering of resources was at its peak by the officers of EIC.

Such exploitation gave birth to various uprisings and resulted into the transfer of regime to British crown directly. British crown tried to bring some balance by various laws to stabilize governance.

Mention the features of 1858 Act in order to show modifications from the earlier governance system which were extremely exploitative. 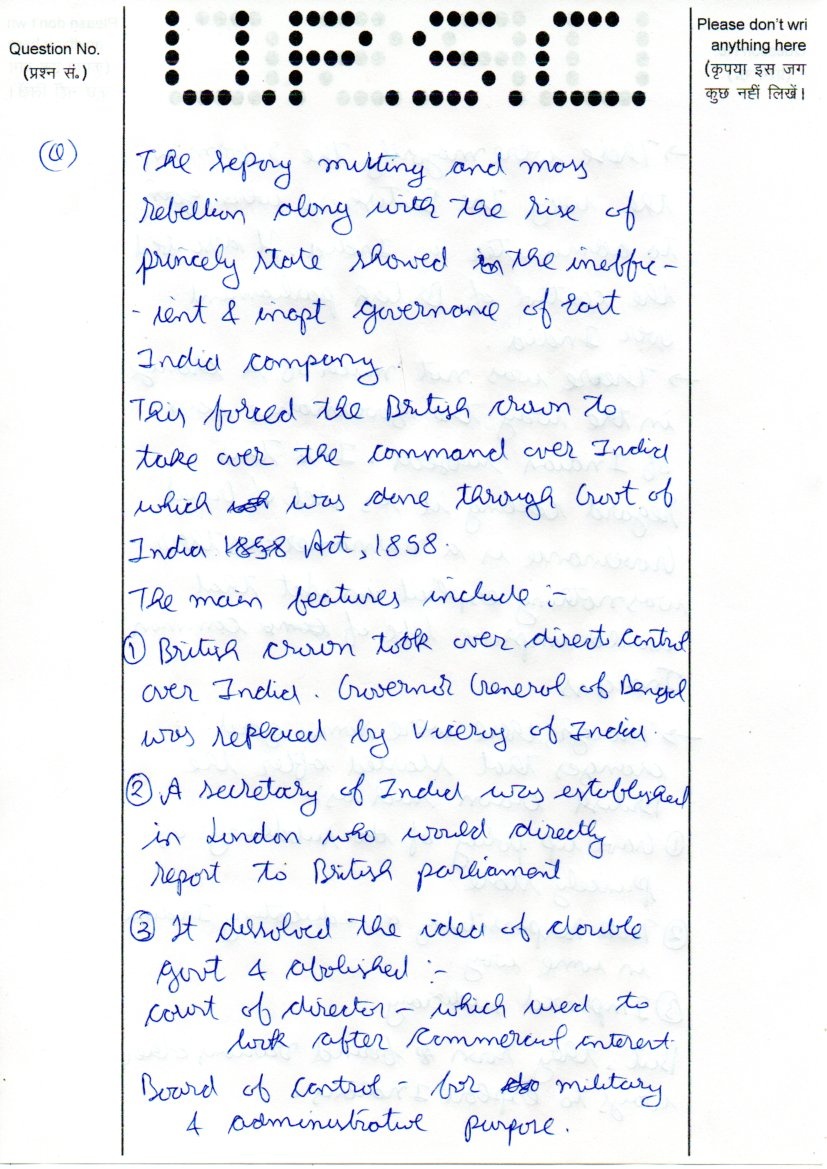 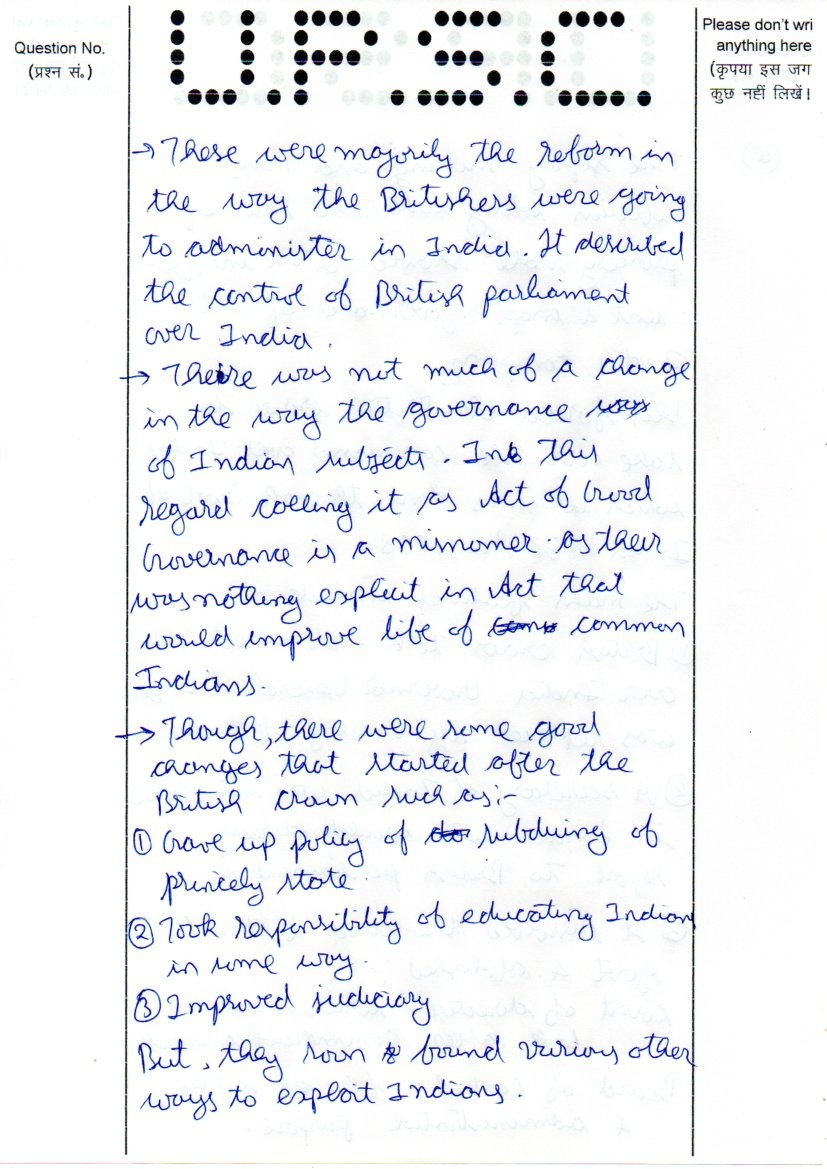 Overall, the approach is below average…need to focus on question more while developing points and writing answer….
Though…as a first attempt its good….continue practicing….will improve for sure…
Keep writing…

Thank you sir for the review. I will try to improve. I have 3 question.
1) Sir, can we contradict the statement by calling the act as misnomer? As it only changed the way British parliament would control Indian affairs and hardly any improvement was seen on Indian ground.
2) These were not directly the provision of act– “The Principle of Doctrine of Lapse was withdrawn, liberty was given to Indian rulers subject to British suzerainty and it also opened some door for Indians in Government services.” but happened generally after 1857 revolt. Should we include it in answer?
3)”The members could ask questions regarding Indian affairs thus involving transparency. The British Parliament became questionable regarding any of India’s affairs which paved the way for some of the good reforms.” — Such analysis are not mentioned in standard books. How to come up with that?? 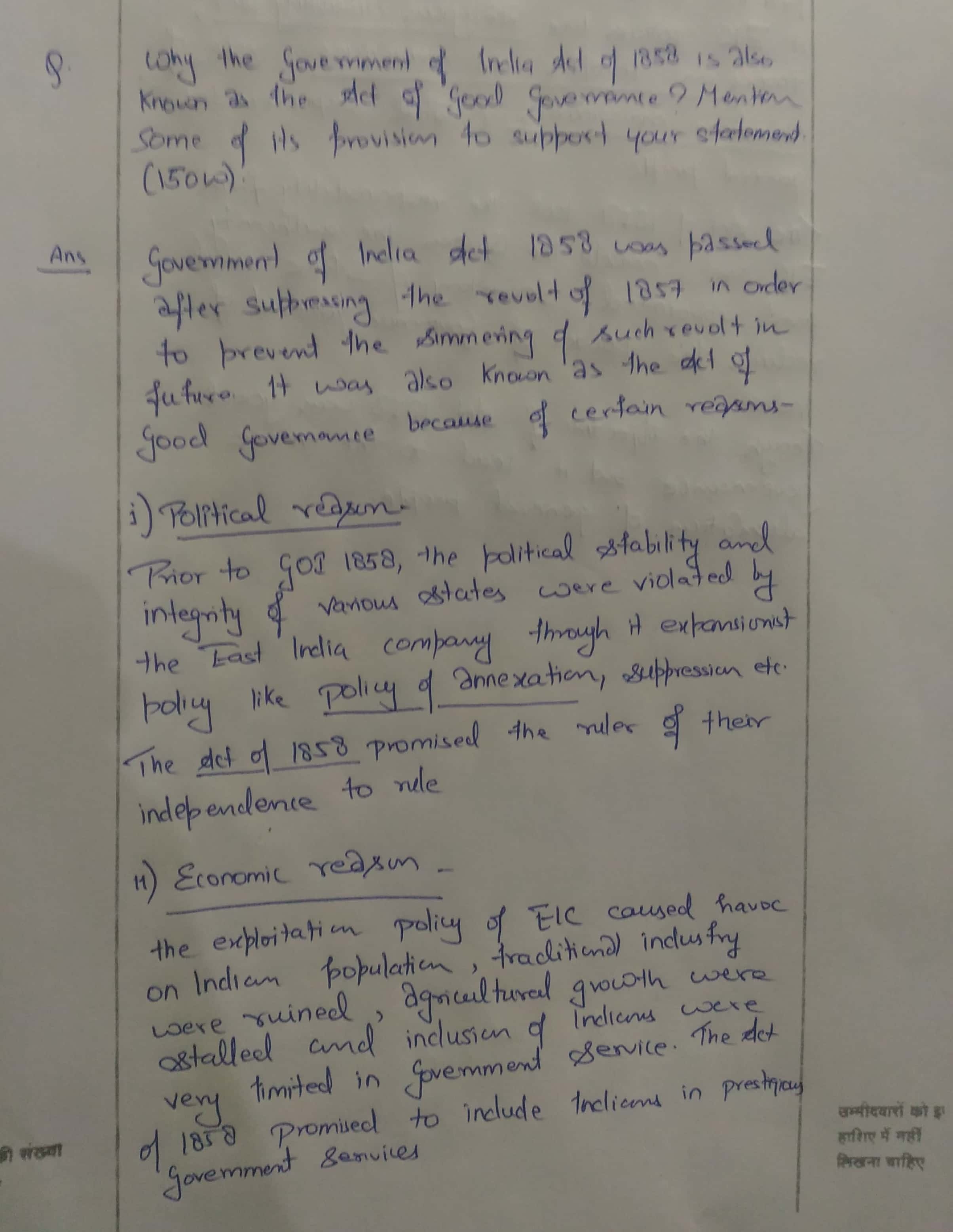 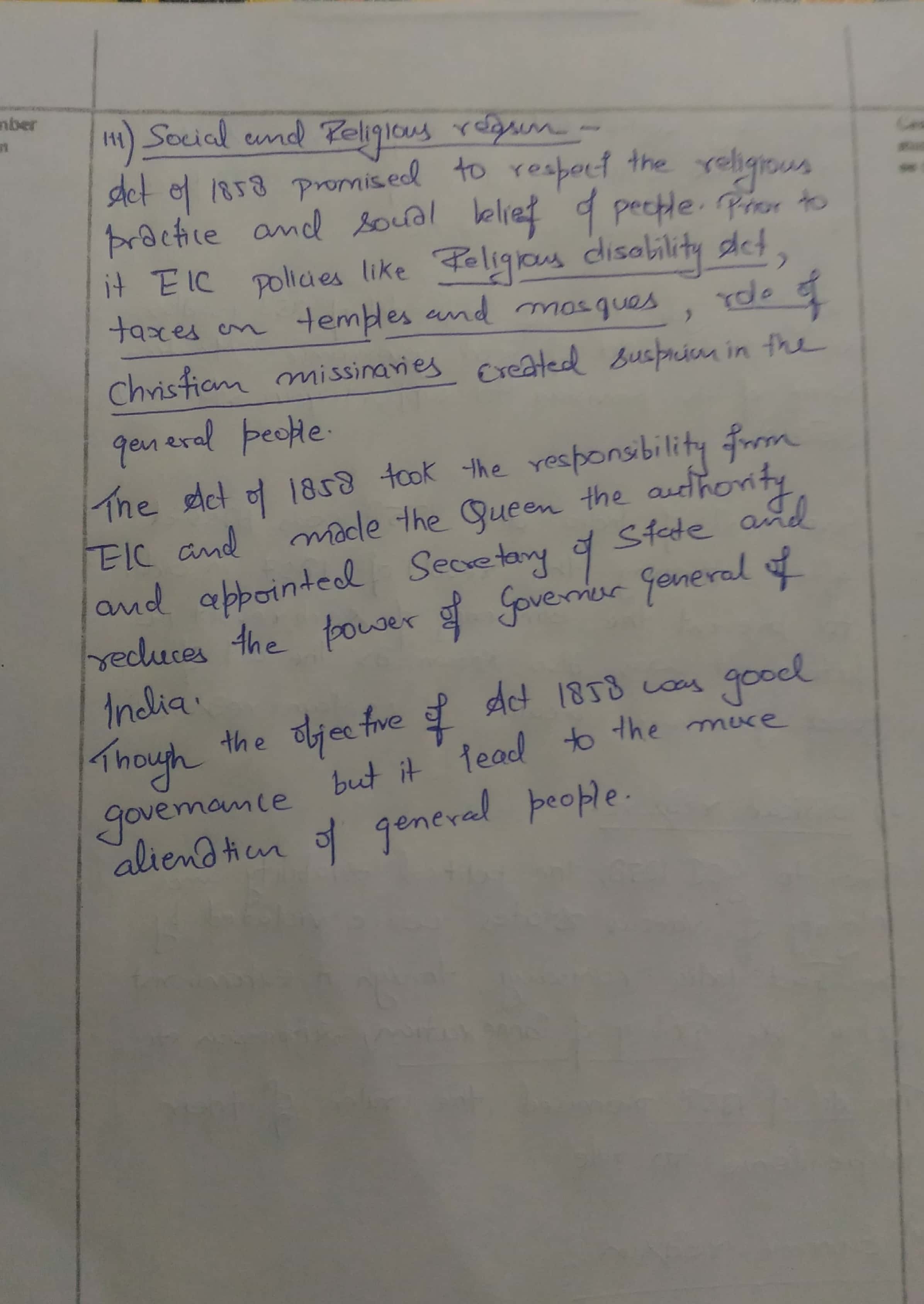 Hello Priyadarshi….
-One suggestion…you have the habit of writing two types of a (both are small letters)…kindly ensure the correctness of it…

-Introduction seems to be okay….though more ideas can be brought in it….
-Don’t refrain yourself from bringing more and more ideas….you could have mentioned some of the provisions like…The Principle of Doctrine of Lapse was withdrawn, liberty was given to Indian rulers subject to British suzerainty and it also opened some door for Indians in Government services…etc…etc…
-You have brought only 3 points in support that too mentioned in very general way….
-Overall this is an average answer….points are there but talks about general ideas…
Though attempted good….will certainly improve further….
Keep writing…
Marks awarded: 3/10 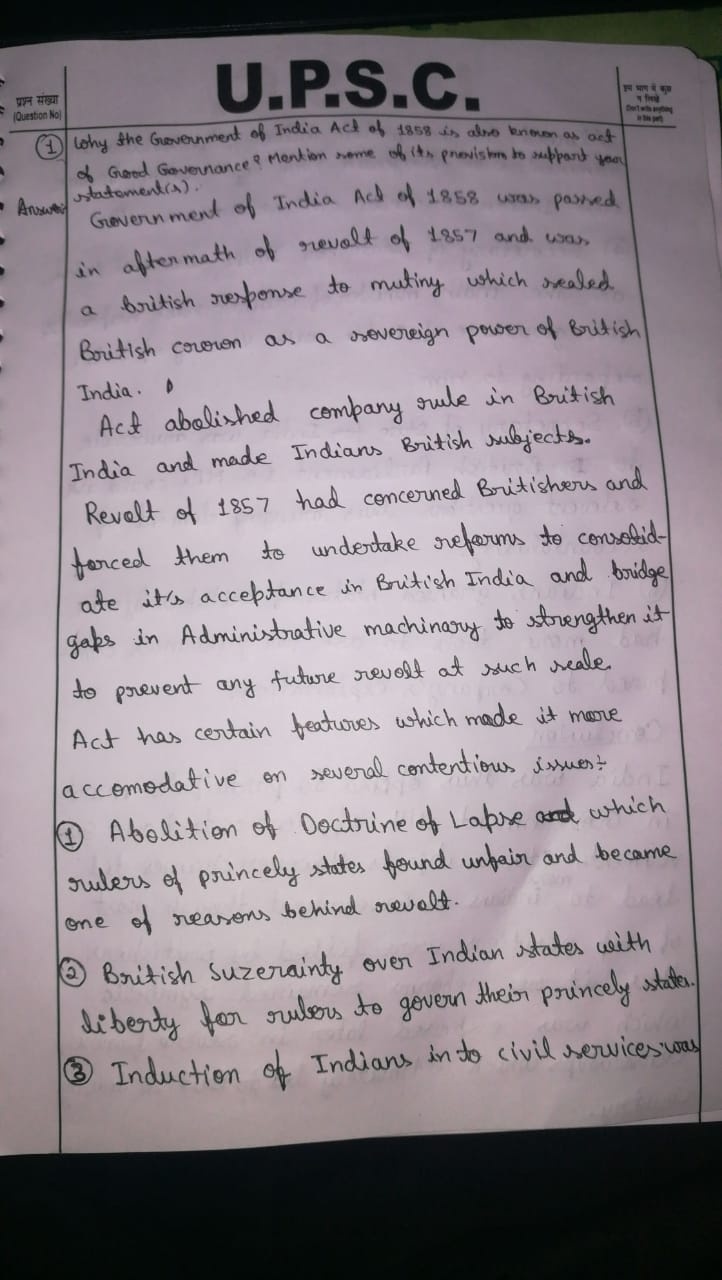 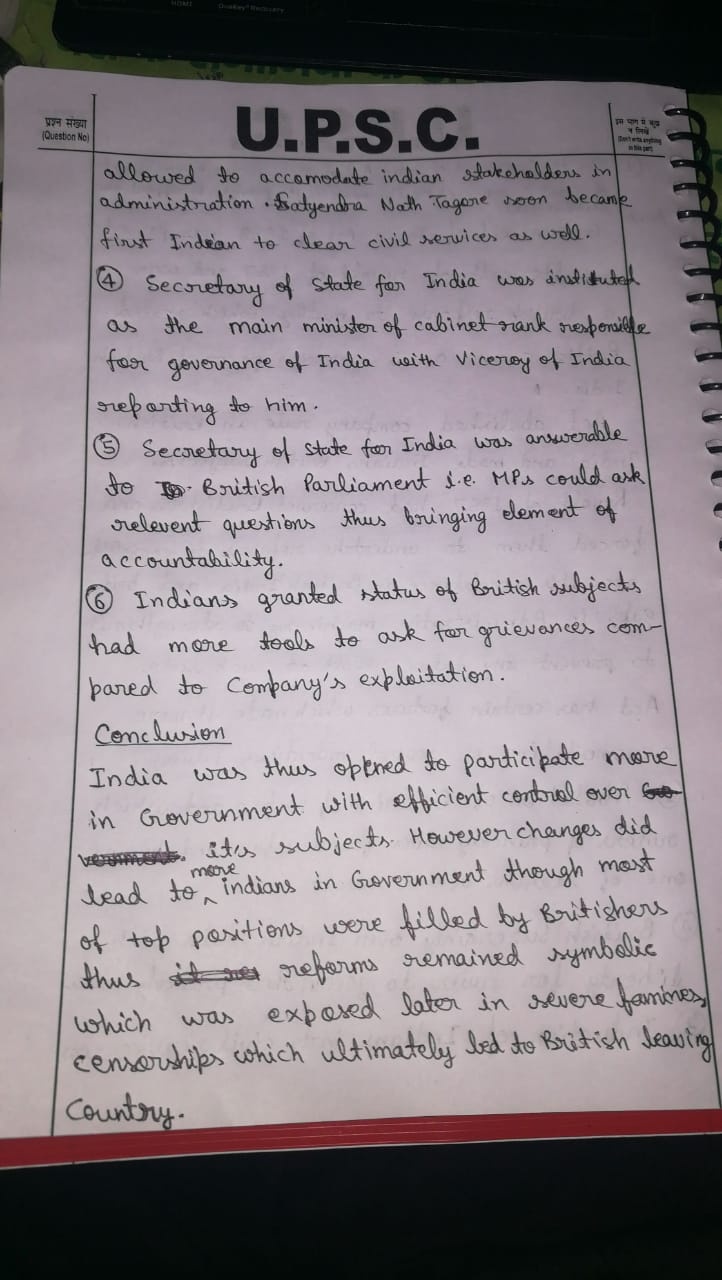 Hello Prafull….
-Introduction is okay…Introduction could have mentioned itself that prior to crown rule…the EIC rule was very exploitative, the officers were too corrupt and extracted or plundered as much as they can…hence the new Act brought huge relief from such exploitations and hence termed as the Act of Good Governance….(This much clarity is required in Intro itself)….
-The rest of the points are very good with beautiful arrangement….
-Overall, very good approach….nice attempt…well done….keep it up….
Keep writing…
Marks awarded: 6/10