In a very narrow sense, Agriculture marketing means delivering farm product from farmers to the final consumers. The National Commission on Agriculture defined agricultural marketing as a process which starts with a decision to produce a saleable farm commodity, and it involves all aspects of market structure of system, both functional and institutional, based on technical and economic considerations and includes pre- and post-harvest operations, assembling, grading, storage, transportation and distribution.

The Broader role of Agriculture Marketing in India. 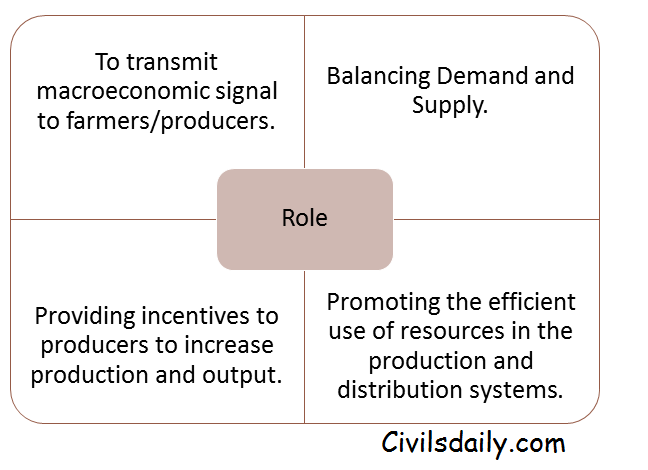 The prerequisites to attain these goals are: 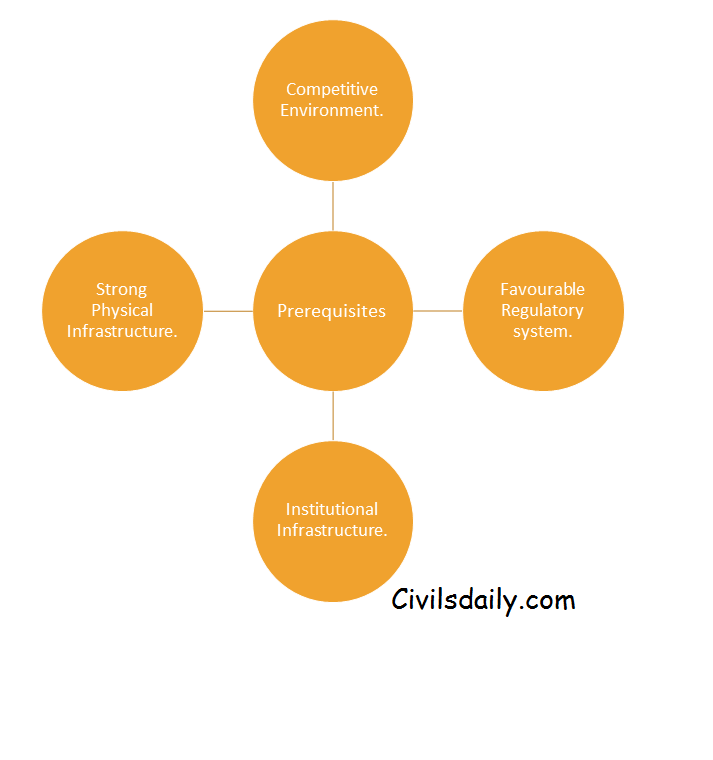 These conditions cannot come up on their own, particularly in a developing country like India. Therefore, agricultural market policies are treated as an integral part of development policies and their functioning has remained an important part of public policy in India.

Policy interventions in agricultural markets in India have a long history. Till the mid-1960s, it was mainly meant to facilitate the smooth functioning of markets and to keep a check on hoarding activities that were considered unfriendly to producers and/or consumers.

Subsequently, the country opted for a package of direct and indirect interventions in agricultural markets and prices, initially targeted at procuring and distributing wheat and paddy. This gradually expanded to cover several other crops/products and aspects of domestic trade in agriculture.

(b) market infrastructure and institutions; and

Regulatory measures include development and regulation of wholesale markets in Indian; and, adoption of legal instruments for regulation of agriculture marketing and trade.

All wholesale markets for agricultural produce in states that have adopted the Agricultural Produce Market Regulation Act (APMRA) are termed as “regulated markets”. With the exception of Kerala, J & K, and Manipur, all other states have enacted APMC Act.

The working of the APMC

The Act is implemented and enforced by APMCs established under it. 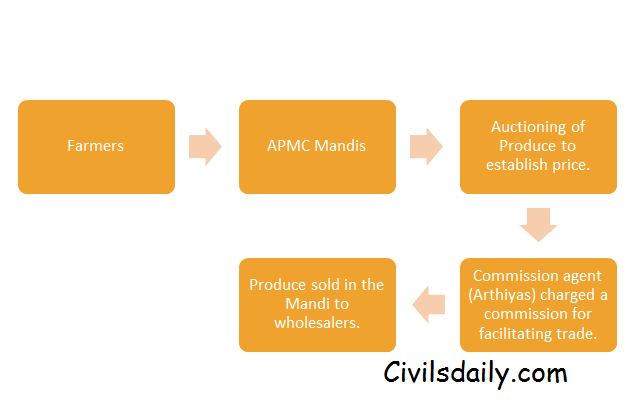 The Advantages of APMC Act 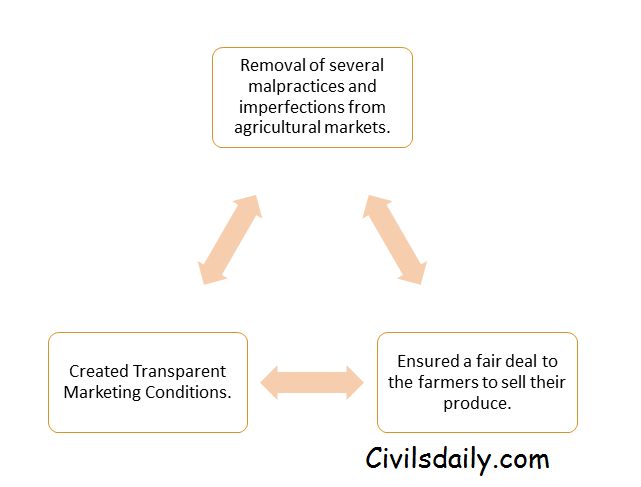 Besides improving the way markets functioned, the Acts created an environment that freed producers-sellers from exploitation by traders and mercantile capital.

The APMC act in recent years have developed certain inefficiencies, and the opponents have strongly argued to revamp the act as per the needs of the current situations. The main argument for the changes are: 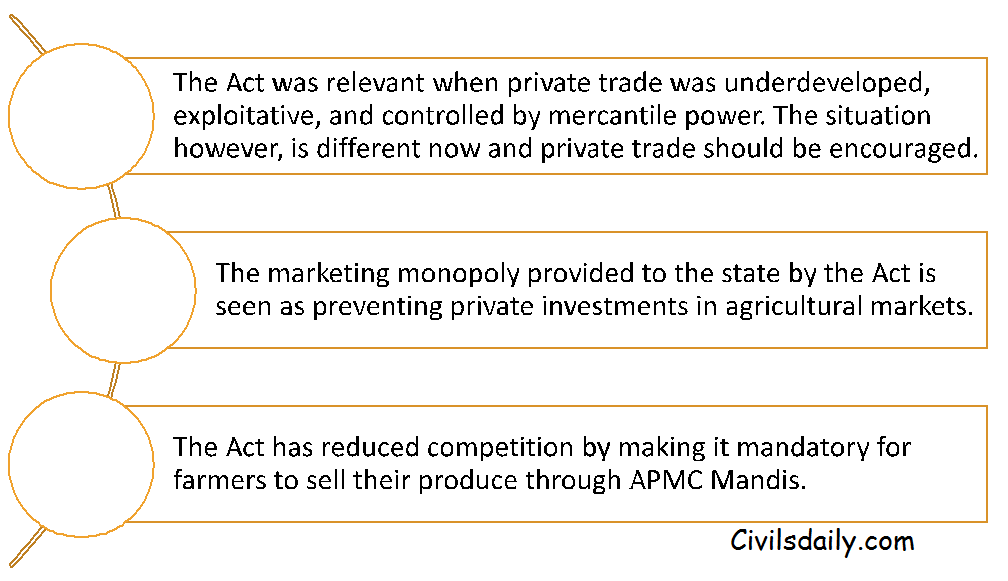 Because of all this, the Inter-Ministerial Task Force on Agricultural Marketing Reforms (2002) recommended that the APMC Acts be amended to allow for direct marketing and the establishment of agricultural markets in the private and cooperative sectors.

The rationale behind direct marketing is that farmers should have the option to sell their produce directly to agribusiness ﬁrms, such as processors or bulk buyers, at a lower transaction cost and in the quality/form required by the buyers.

On the recommendation of the committee, the government had come up with a Model APMC Act in 2003.

Initial situation: When the APMC Act was enacted by various states in the mid-1960s, the country was facing a serious food shortage and desperately seeking to achieve a breakthrough in food production. It was strongly felt that it would not be possible to attain and sustain food security without incentivising farmers to adopt new technology and make investments in modern inputs.

Therefore, high priority was attached to enabling farmers to realise a reasonable price for their produce by eradicating malpractices from markets, protecting them from exploitation by middlemen, and creating a competitive pricing environment. Simultaneously, the hold traders and commission agents had over them by providing credit was diluted by increasing the supply of institutional credit. This, along with technology-led output growth, resulted in increased farm incomes, making farmers less dependent on the trading class for credit and cash requirements. It also gave farmers the freedom to choose markets and buyers for their produce.

The Green Revolution Era: The spread and success of the green revolution during the 1970s and 1980s led to an increase in the political power of the farming class and their clout in policymaking. This was reflected in the creation and strengthening of farmer-friendly institutions and a policy environment favourable to farmers.

Marketing institutions like market committees, state-level agricultural marketing boards and many others in the public and cooperative sectors served the interests of the farming community.

The entry of Middlemen’s Post 1991: Over time, as the country moved closer to food self-sufﬁciency, public policy began losing its focus. The marketing system and marketing institutions were plagued by inefﬁciencies, bureaucratic control, and politicisation.

There was also a reversal of the credit situation after 1991, making farmers more dependent on commission agents and traders for loans. The trading class quickly regained its marketing power over farmers by meeting their credit requirements with interlocked transactions, robbing producers of the freedom to decide where they would sell and whom they would sell to. Taking advantage of the lax attitude of state governments towards marketing, the trading class consolidated their power in mandis.

Some examples of this are:

The Act provides for instruments like licences, permits, regulations and orders for

(h) compulsory purchase by the government, and

(i) sale (levy) to the government.

Agriculture Produce Grading and Marketing Act: The act deﬁnes standards of quality and prescribes grade speciﬁcations for a number of products. The Act authorises an agricultural marketing adviser in each state to grant a certiﬁcate of authorisation to persons or corporate bodies who agree to grade agricultural produces as prescribed by it.

There are AGMARK grade speciﬁcations for 212 agricultural products, but the use and awareness of it have remained low despite a better understanding of quality attributes among consumers.

This is a great primer to understand the evolution of APMC