The entry of private sector in Agriculture Marketing 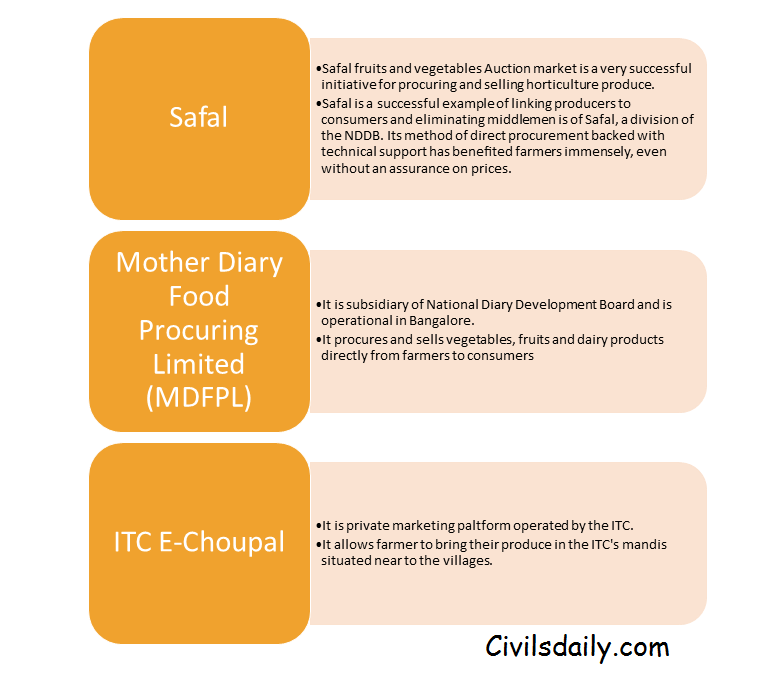 Some other Innovative Marketing Mechanisms

Some innovative marketing mechanisms have been developed in some states, which involve the direct sale of farm produce to consumers, the sale of produce to buyers without routing it through mandis, and group marketing. Many states have attempted to promote direct contact between producers and consumers by making arrangements for sale at designated places in urban areas. 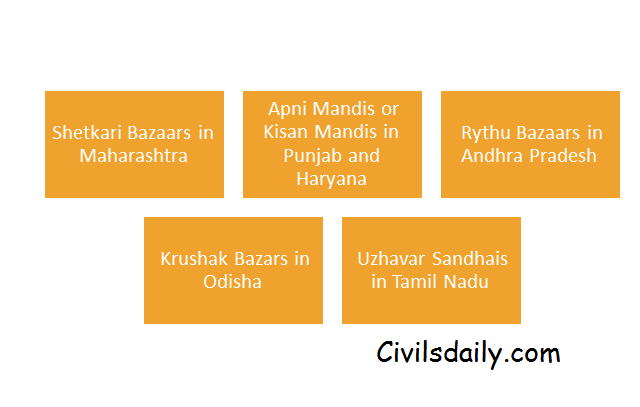 Farm producers’ organisations (FPOs) of various kinds are emerging as a new model for organised marketing and farm business. Such models include informal farmers’ groups or associations, marketing cooperatives and formal organisations like producers’ companies. Producers can beneﬁt from getting together to sell their produce through economies of scale in the use of transport and other services, and raise their bargaining power in sales transactions, while marketing expenses get distributed. This results in a better share of net returns. Such models are particularly required for small farmers to overcome their constraints of both small size and modest marketable quantities.

Organised Retail Outlets: The direct purchase of farm produce by retailers has been steadily increasing with the growth of organised retailing in India. This is expected to accelerate if the entry of foreign direct investment (FDI) to the ﬁeld is allowed further.

Food World (of the RPG group) is the leader among organised food retail chains, and there are many more such as Fab Mall, Monday to Sunday, Family Mart, More for You, Heritage, Reliance Fresh and Big Bazaar.

Most food chains are regional in nature, having one or two outlets in the main cities, but no big presence outside their states. Rapid urbanisation, urban population growth, increase in incomes and consumer spending, changing lifestyles, and access to technology have been the important factors behind the expansion of food retail chains in India. Despite several factors favouring organised retail trade, it is still in a nascent stage in the country.

The PMFBY is in line with the concept of the ‘one nation one scheme’ theme. The purpose of PMFBY is to remove the shortcomings of the previous agriculture insurance schemes and incorporates the best features of previous insurance schemes. The PMFBY has replaced the National Agricultural Insurance Scheme and Modified National Agricultural Scheme. The PMFBY has been introduced with the following objectives:

Features of the scheme

Table 1: A Comparison of PMFBY and other Insurance Schemes

Table 2: Challenges faced by the MNAIS/NAIS and PMFBY