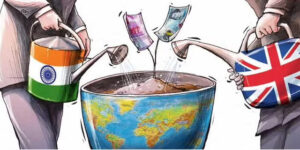 Background of the India-UK ties

What progress has been made in the India-UK relationship?

1.Economic: During 2019-20, trade between the two countries stood at US$ 15.45 billion with the balance in favor of India. Between April 2021-February 2022, Indian exports to the UK stood at US$ 9.4 billion (2.5% of India’s exports). The imports in the corresponding period were US$ 6.59 billion (1.2% of India’s imports). There is a scope for significant improvement. Both countries expect that the bilateral trade can reach US$ 100 billion by 2030.

2.Defense and Security: India and the UK signed the Defence and International Security Partnership (DISP) in November 2015. It provides a strategic roadmap and direction to the evolving India-UK Defence Relations. At present some 70 companies in the UK supply goods for aircraft and related equipment besides supporting platforms like the Jaguar, Mirage and Kiran aircraft.

3.Indian Diaspora: Around 1.5 million people of Indian origin live in Britain. Indian diaspora are making significant contributions to the British Society. This includes 15 Members of Parliament, three members in Cabinet, and two in high office as Finance and Home Ministers.

4.Education: The UK-India Education and Research Initiative (UKIERI) was launched in 2005. A new ‘UKEIRI Mobility Programme: Study in India’ was also launched in 2019. Under this Britain’s universities collaborate with Indian partners and send UK students to India.

What is the significance of India-UK Relationship?

1.Regional and global issues of mutual interest: A healthy relationship between the two is imperative for enhancing cooperation in the Indo-Pacific, Afghanistan, UNSC, G20 and Commonwealth. For instance, India welcomed the UK’s accession in the Indo-Pacific Ocean’s Initiative under the Maritime Security pillar.

2.Tackling Climate Change: The cooperation between them can be helpful to achieve the goals of the Paris Agreement and in implementing the Glasgow Climate Pact. For instance, the countries have agreed to work for early operationalisation of the Global Green Grids-One Sun One World One Grid Initiative (OSOWOG) under ISA. They are also working on the IRIS platform under CDRI which was jointly launched by India and UK at COP26.

3.Supporting 3rd World Countries: Through the Global Innovation Partnership, India and UK have agreed to co-finance up to £ 75 million to support the transfer and scale up of climate smart sustainable innovations to third countries. The novel GIP Fund created under this Partnership will also aim to raise additional £ 100 million from the market to support Indian innovations.

3.Strategic Considerations: India can engage with the UK to counter China’s rise in the Indian Ocean Region. The UK on other hand can use India as an alternative destination to China and its companies can invest in India as part of China plus one strategy. It is the business strategy to avoid investing only in China and diversify business into other countries.

Q.Analyse India-UK bilateral relations with scope of upscaling and challenges they need to overcome .