Supply disruptions during the pandemic and the Russia-Ukraine war have led many nations to think about “self-sufficiency” in critical food items or at least reduce their “excessive dependence” on imports of essential food products. 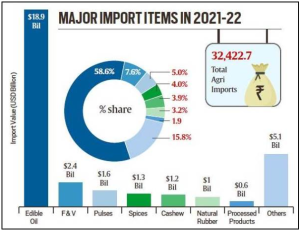 Overall, unless India thinks holistically and adopts a long-term vision, the chances of reducing India’s imports of edible oils from 14MMT in FY22 to 7MMT by FY27 look bleak.