ASTROSAT, India’s first multi-wavelength satellite observatory, has detected an extreme ultraviolet (UV) light from a galaxy which is 9.3 billion light-years away from Earth. 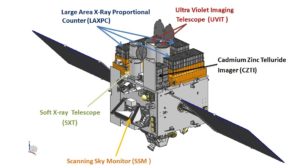 Consider the following statements regarding the AstroSat:

1)AstroSat is India’s multi-wavelength space telescope.
2)ASTROSAT mission is that enables the simultaneous multi-wavelength observations of various astronomical objects with a single satellite.
3)ASTROSAT observes the universe in the optical and high energy X-ray regions of the electromagnetic spectrum.

Which of the following above statements is true?

Find some time to scroll through recent ISRO missions and discoveries.