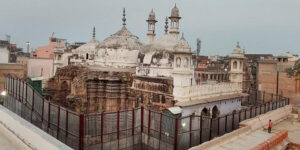 The Varanasi District and Sessions Court has rejected the plea of the organization which manages the Gyanvapi mosque complex, challenging the maintainability of the civil suits filed by some women seeking the right to worship Goddesses on the outer wall of the complex.

The temple to Lord Shiva

What laws restrict such acts?

What was the case before the Court?

What are the people seeking now?