Mains level : Coronovirus and the hunt for its vaccine

A new research has found how Remdesivir treats coronavirus and described the exact mechanism of interaction between the virus and the drug.   Remdesivir is an experimental antiviral made by American pharmaceutical firm Gilead Sciences that was first developed to treat Ebola.

DNA/RNA related terminologies, Genes and Genomes, etc. always find their way in UPSC Prelims.  Most recent one was-

With reference to the recent developments in science, which one of the following statements is not correct? (CSP 2019)

(a) Functional chromosomes can be created by joining segments of DNA taken from cells of different species.

(b) Pieces of artificial functional DNA can be created in Iaboratories.

(c) A piece of DNA taken out from an animal cell can be made to replicate outside a living cell in a laboratory.

(d) Cells taken out from plants and animals can be made to undergo cell division in laboratory petri dishes.

How does replication take place? 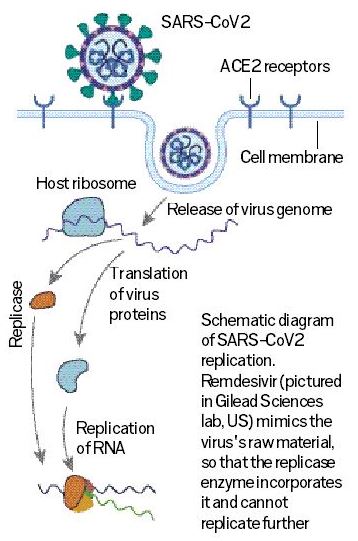 And how exactly does Remdesivir target this enzyme?