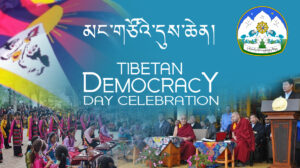 A little more than six decades ago, Tibetan Democracy Day was marked with the inauguration of the Tibetan government-in-exile in Dharamshala on September 2.