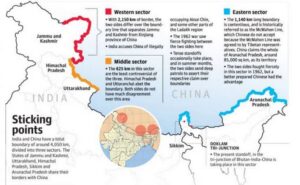 India and China have announced that their Armies have begun to disengage from Patrolling Point-15 in the Gogra-Hot springs area at LAC.

What is LAC- the Line of Actual Control?

What is the disagreement?

When did India accept the LAC?

How was the disengagement carried on?

Significance of the disengagement

What was the dispute over LAC?

Why did India change its stance on the Line of Actual Control?

Is the LAC also the claim line for both countries?

Why are these claim lines controversial in Ladakh?