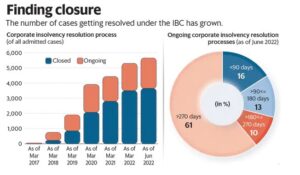 India introduced the pre-packaged insolvency resolution process (PPIRP) in April 2021, as an alternative resolution process for micro, small and medium enterprises (MSMEs). However, it has only two cases admitted under it so far.

What is the Insolvency and Bankruptcy Code (IBC)?

What were the objectives behind introducing PPIRP?

What is the progress in PPIRP so far?

Does PPIRP defeat the purpose of IBC?