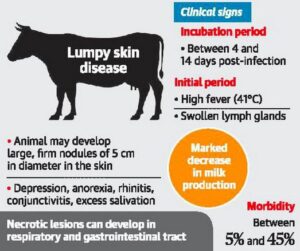 The Mumbai Police have ordered the prohibition of cattle transportation in the city to prevent the spread of the lumpy skin disease (LSD).

What is the Lumpy Skin Disease?

How does it spread?

How does it affect the animal?

Do it kills the animal?

What is the geographical distribution and how did it spread to India?

Is it safe to consume the milk of affected cattle?

Why India is at higher risk?

How bad is the current spread in India?

The FAO has suggested a set of spread-control measures for LSD, which involves: