This article is about Polarstern, is an icebreaker, which traversed the Arctic Ocean to study the aspects related to ice there. Here, we will look at some of these aspects. These aspects are-monitoring of the ice, difficulty in measuring the thickness, rate of melting of ice and relations with cloud formation.

Arctic: A recorder and driver of climate change

How is it a recorder of climate change? 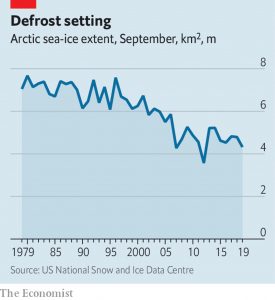 How is it a driver of climate change?

Let’s understand why the data about thickness could be inaccurate

How topography of Arctic ice matters

So, how these ridges affect the rate at which ice melts?

How cloud formation is affected by cracks in Arctic ice

Properly disentangling the interactions between Arctic ice, atmosphere and ocean life will require data collected across a full year—for the contrast between winter and summer at the poles is greater than anywhere else on the planet.