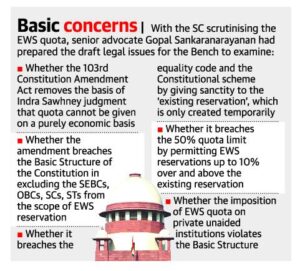 A five-judge Constitution Bench led by CJI U.U. Lalit are hearing petitions challenging the 10% quota for the economically weaker sections (EWS) and an Andhra Pradesh law that grants reservation to Muslims.

Significance of the quota

What are the court’s questions about the criteria?

What is the current status of the EWS quota?

The EWS quota will come in for judicial scrutiny soon. But it’s not only a matter for the judiciary, India’s Parliament should revisit the law too.