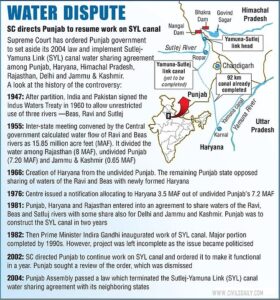 The Supreme Court drew an assurance from the State of Punjab that it will meet the Haryana counterpart within this month to discuss the construction of the Sutlej-Yamuna Link (SYL) Canal which has been languishing for two decades.

What is the SYL canal issue?

Inception of the canal project

Why has the SYL canal come up again now?

Punjab’s resentment with the project

Which one of the following pairs is not correctly matched? (CSP 2017)