The revival of the demand for two autonomous councils has made political parties and community-based groups call for bringing the entire Arunachal Pradesh under the ambit of the Sixth Schedule or Article 371 (A) of the Constitution.

Q.The provisions in Fifth Schedule and Sixth Schedule in the Constitution of India are made in order to-

(a) protect the interests of Scheduled Tribes

(b) determine the boundaries between States

(c) determine the powers, authority and responsibilities of Panchayats

(d) protect the interests of all the border States

What is the Sixth Schedule? 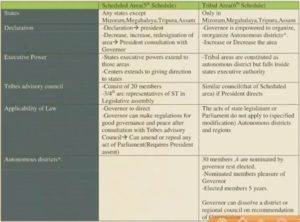 Try this question from AWE Initiative:

The Sixth Schedule of the Constitution is often referred to as a charter for autonomy of a wide magnitude, but it has failed to decrease the tension between different stakeholders at the ground level. Elaborate. (150 W/ 10 M)