The final design of the Indian National Flag, hoisted by PM Nehru on August 16, 1947, at Red Fort, had a history of several decades preceding independence.

Note various personalities involved in the development of our National flag. It may be no wonder to accept a personality-based question on such topics.

Story of our National Flag: A timeline 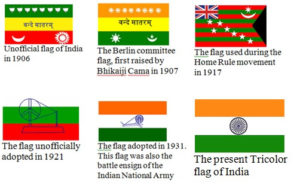