Prelims level : Preamble to the Constitution 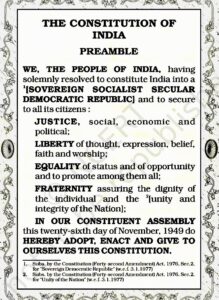 The Supreme Court will hear a petition filed by former MP Dr Subramanian Swamy, seeking the removal of the words “Socialist” and “Secular” from the preamble of the Indian Constitution.

How did these words come?

What is the purpose of the Preamble?

“WE, THE PEOPLE OF INDIA, having solemnly resolved to constitute India into a SOVEREIGN DEMOCRATIC REPUBLIC and to secure to all its citizens:

EQUALITY of status and of opportunity;

And to promote among them all

FRATERNITY assuring the dignity of the individual and the unity of the Nation;

IN OUR CONSTITUENT ASSEMBLY this twenty-sixth day of November, 1949, do HEREBY ADOPT, ENACT AND GIVE TO OURSELVES THIS CONSTITUTION.”

Nature of the preamble

Is it a part of the Constitution?

How else has the preamble been debated earlier?

What is the right-wing narrative?

Under what circumstances was the preamble amended?

Were ‘Secular’ and ‘Socialist’ debated before Independence?

Is it inclusive of the Constitution?