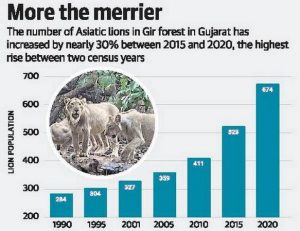 Asiatic lions have now significantly risen in number at an estimated population of 674 in the Gir forest region of Gujarat. Unlike in previous years, this count was estimated not from a Census, but from a population “observation” exercise called Poonam Avlokan.

Q. The term ‘M-STrIPES’ is sometimes seen in the news in the context of