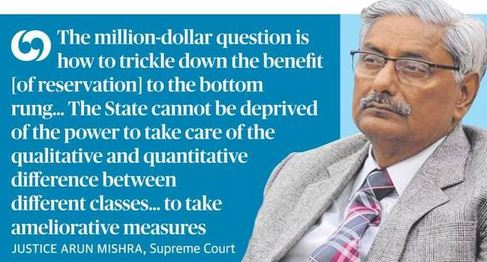 A five-judge Bench of the Supreme Court has held that States can sub-classify Scheduled Castes and Scheduled Tribes in the Central List to provide preferential treatment to the “weakest out of the weak”.

Try this question for mains;

Q.Reservation is no more seen by the Supreme Court as an exception to the equality rule; rather, it is a facet of equality. Discuss this in light of the quest for sub-categorisation of Scheduled Castes/Tribes.

What is the sub-categorisation of SCs?

There lies struggle within castes: SC

Way ahead with the Judgement

[Burning Issue] SC judgement on Reservation not being a Fundamental Right