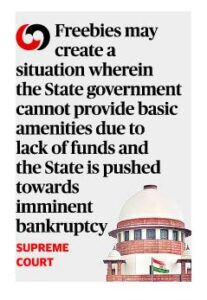 The Supreme Court has decided to reconsider a 2013 judgment on Poll Promises, which held that promises in the election manifesto do not constitute a “corrupt practice” under the law.

Why revisit this judgment?

What amounts to Freebie?