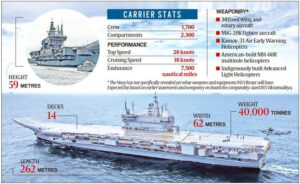 The nation’s first Indigenous Aircraft Carrier (IAC-1) , INS Vikrant is set to be commissioned on September 2, the Indian Navy has announced.

Why is it important for India to have an aircraft carrier?

Why is it a big deal that this warship has been Made in India?

What indigenous components does the new ‘Vikrant’ have?

What weapons and equipment will the new ‘Vikrant’ have?

What else will be there on the new INS Vikrant?

Now that India has shown the capability, will it build more carriers?

Significance of the induction