Issue of flood in the cities

Impact of the devastation due to floods:

What is to be done

2) Implementing the idea of sponge cities 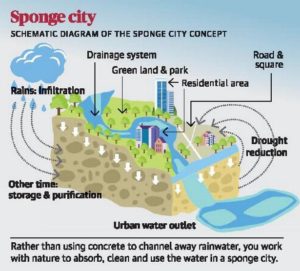 On a top priority, such a mission should address the following.

We can learn to live with nature, we can regulate human conduct through the state and we can strategically design where we build. We need to urgently rebuild our cities such that they have the sponginess to absorb and release water without causing so much misery and so much damage to the most vulnerable of our citizens, as we have seen.

As much as I appreciate your interest in the subject, as the author of the original piece published by The Hindu, the acceptable practice is to cite the author/ source.
https://www.thehindu.com/opinion/lead/time-for-a-sponge-cities-mission-in-india/article32985979.ece