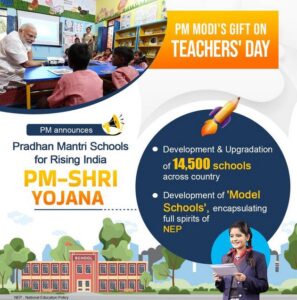 Prime Minister has announced that under the PM SHRI Scheme, as many as 14,500 schools will be “upgraded” across India to showcase the components of the National Education Policy, 2020.

What is the PM SHRI scheme?

What are the key features of NEP in school education?

What is a centrally sponsored scheme?

How will PM SHRI schools be different from Kendriya Vidyalayas or Jawahar Navodaya Vidyalayas?

Where will the PM SHRI schools come up?