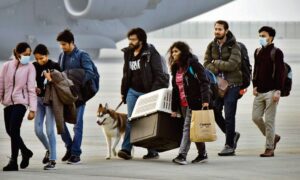 The Centre has told the Supreme Court that the law does not allow undergraduate medical students, who fled the “war-like situation” in Ukraine, to be accommodated in Indian medical colleges.

Which laws is the govt talking about?

Why foreign undergraduates are not permitted?

Why do Indians go abroad for medical studies?

Preferred countries for a medical degree

Hype of becoming a Doctor

Why do Indians prefer going abroad?

(a) More aspirants than seats