A new Greenpeace report has estimated the global cost of air pollution from fossil fuels at around $2.9 trillion per year, or $8 billion per day — 3.3% of the world’s GDP.

India is estimated to bear a cost of $150 billion, or 5.4% of the country’s GDP, which is the third-highest absolute cost from fossil fuel air pollution worldwide.

China and the US are estimated to bear the highest absolute costs from fossil fuel air pollution, respectively at $900 billion and $600 billion. 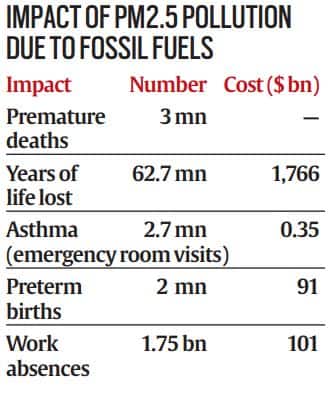 In India, exposure to fossil fuels also leads to a loss of around 490 million workdays, the report said.