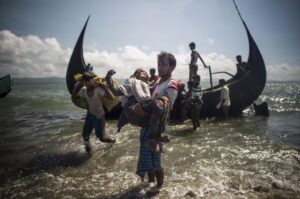 In a major boost to India’s policy on the Rohingya, the MHA would shift Rohingya refugees to flats meant for EWS in Delhi.

Who are the Rohingyas?

Why are they stateless?

Why did the Crisis happen?

Where do the Rohingya live in Delhi?

How is the Delhi government involved?

When did the Rohingya come to Delhi?

What is the process of deportation?

Have any Rohingya been deported?

What is India’s stand on refugees?