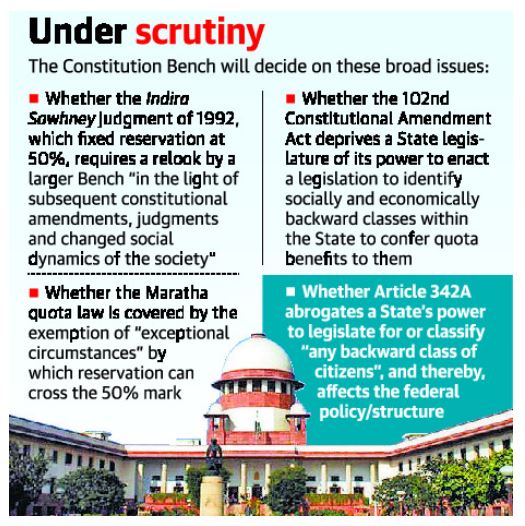 The Supreme Court sought responses from all states on whether the 50% ceiling limit on reservation needs to be reconsidered.

A case for Maratha Reservation

Challenges to the Maratha quota

There are two main constitutional questions for the court to consider in the challenge to the Martha quota law.

What is the Indra Sawhney Case?

What did the verdict say?

Precedents set by the judgment

How does the Maratha reservation relate to the Indra Sawhney case?

Similar to the Maratha issue are the cases of Patels in Gujarat, Jats in Haryana, and Kapus in Andhra Pradesh.

Have any other states breached the 50% ceiling before?

How does the Ninth Schedule come to the picture?

The constitution of India provides safe harbour from judicial review under Article- 31 (B) i.e NINTH SCHEDULE and not in Article – 31 (A) . 31(A) held “Saving of laws providing for Acquisition of estates (A-14,19).”

Thanks, Gunjan! We appreciate it!