The article analyses the allocation for the health sector in the Budget and highlights the need for more allocations.

Need to increase spending on health

Break-up of allocation in Budget on health (and well being) 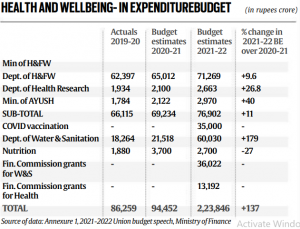 Consider the question “Examine the benefits of the idea of health and well being under which health, water and sanitation and nutrition are clubbed together.”

Water and sanitation are meaningful for health, but not if it only inflates the allocation to “Health and Wellbeing”. What we need is the real increase in spending on health.