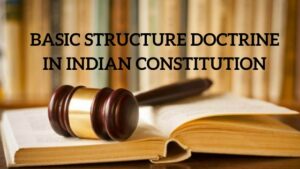 What is basic structure of Constitution?

What is the significance of the basic structure in the Constitution of India? 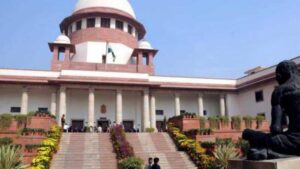 His holiness, Kesavananda bharati, challenged before the supreme court, the validity of 29th CAA which inserted some laws in 9th schedule and affected property of his Hindu Mutt.

What else was at stake?

Supreme Court could do all this as it had held in 1967 in Golaknath case that fundamental rights could not be abridged.

Before returning back to Kesavananda, Let’s take a look at the relevant provisions of the constitution and Supreme Court interpretation of the same.

Other provisions not imp for this article but imp for exams –

Zamindars didn’t like it, not one bit. And here comes the 1st salvo

Challenged 1st CAA. What was the court’s judgment?

Sajjan Singh vs state of rajasthan

But Justice Mudholkar was of the view that the every Constitution has certain features which are basic in nature and those features cannot be changed.

2 minority judgements…. utter confusion. And you can see seeds of basic structure were sown here.

Really? What was the logic given here?

Loss – loss to defendants as well as petitioner.

Madam Indira was in power and she did not like this. Not one bit.

Smarting from this setback, Madam Indira (the parliament, herself) passed 24th CAA to neutralise GOLAKNATH judgement. But there was also a small matter of reversing Copper judgment in bank nationalisation case so parliament passed 25th CAA.

29th CAA had put Kerala land reform act under 9th schedule and his holiness challenged the provisions and all hell broke loose. 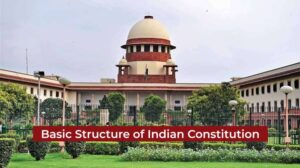 A 13 judge bench is constituted and what does it do!

Most imp decision of all by slimmest of all 7-6 majority stated Parliament can amend any provision of the Constitution but the basic structure should not be destroyed, damaged or abrogated.

Court gave relief to govt but reserved for itself power to review all amendment not just those that violate fundamental rights.

Indira Gandhi didn’t like the judgement one  bit. She (via the president) superseded 3 judges to appoint justice A.N. Ray as CJI.

For the 1st time Supreme Court applied basic structure doctrine and considered free and fair election and rule of law to be part of basic structure. #amending act invalidated.

Note here that 4 of the 5 judges on the bench had given dissenting judgment in Bharati case but still applied the same doctrine for Supreme Court judgment becomes law until overruled by bigger bench (art 141).

Then how did Indira continue to be prime minister and contest election again and not get banned for 6 years?

Find out for fun the charges against Mrs. Gandhi for which she was convicted and what a popular British magazine had to say about the judgement.

Along came the mini constitution i.e 42nd amendment act TO ELIMINATE IMPEDIMENTS TO THE GROWTH OF THE CONSTITUTION –

SC unanimously struck down amendment to article 368 holding limited amending power and judicial review to be part of basic structure.

Court held that constitution is founded on the bedrock of balance b/w FRs and DPSPs. Goals set out by DPSPs have to be achieved without abrogation of means provided by FRs.

If a donee was vested with limited power, it could not be exercised to control that very power power and convert into unlimited one.

If a genie grants u 3 wishes, it is understood u can not, as one of the wish, ask for unlimited number of wishes!

Janta govt comes to power and 44th CAA deletes art 31 (b) right to property and 19 (f) freedom to acquire, hold and dispose of property as they were not considered part of basic structure

Right to property now a constitutional right under art 300A.

I.R.Coelho vs state of TN

Supreme Court held that acts placed under 9th schedule after basic structure subject would be subject to judicial review to the extent of those acts violating basic structure of constitution.

It certainly saved Indian democracy from degenerating into authoritarian regime during those testing times but it has also given immense untold unbridled power to Supreme Court and made it the most powerful court in the world.

As we would later see in the NJAC Verdict (let’s call it 4th judges case), Supreme Court applied this doctrine, many would say for wrong reasons to strike down the act and kept for itself the power to appoint brother judges. In the original constitution only fetters on the power of parliament was art 13.

Relevance –  It was delivered at the time of single party rule both at the centre and most of the states. In the era of coalition politics no govt is going to wield so much power to destroy the constitution and then there is ever present danger of tyranny of unelected.

But only legitimate way to overturn the verdict would be a 15 judge bench so don’t hold your breath for that.

Now is the time for some thought questions

Both statements are true…..If amendments were not law, what was the purpose of art 13 (2) other laws would anyway be declared unconstitutional!

#2. Is basic structure doctrine relevant in the present political scenario where no single party is unlikely to enjoy majority in both the houses?

#3. What should be the limits to amending power of parliament? Do u think for very substantial amendments instead of courts, people by way of referendum should determine whether amendment should go through or not?

#4. Whatever happens to original intent theory that constitutional courts have to interpret constitution in accordance with the implied intentions of founding fathers and there is enough evidence to suggest founding fathers thoughtfully kept FRs sacrosanct to prevent their abrogation or as we would see in a later article how supreme court by creative interpretation virtually changed procedure established by law in art 21 to due process of law while founding fathers deliberately kept expression as procedure established by law.