After the Rajapaksas’ win in the November 2019 presidential polls and the August 2020 general election, the spotlight has fallen on two key legislations in Sri Lanka’s Constitution. 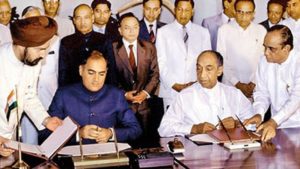 What is the 13th Amendment?

Why is it contentious?

Why is it significant?

Mains level: Constitutional crisis in Sri Lanka & how it could affect India

Impact of this move

With inputs from editorial: Storm in Colombo

“The government itself has gone public saying that it could not go the full distance,” Jayampathi Wickramaratne, a constitutional lawyer who was involved in drafting the 19A, said.

If you are talking of percentages the powers of the presidency have been reduced by about 60 to 65%.