The Ministry of Road Transport and Highways (MoRTH) has issued an order mandating a coloured strip to identify four-wheeled BSVI vehicle.

Note important PM levels allowed under BS VI norms. Note how it is different from the earlier BS IV norm.

Details of the colour band 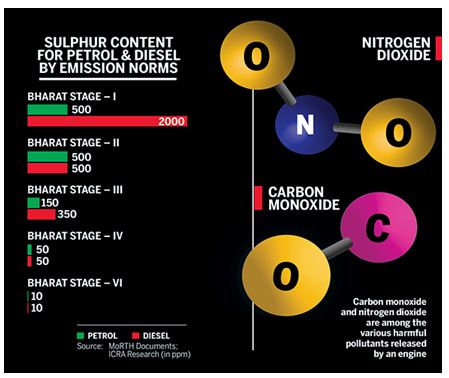 The Ministry of Road Transport and Highways has issued a notification regarding the emission norms for L7 (Quadricycle) category for BS-VI.

Q. What are Bharat Stage Emission Standards (BSES)? Discuss how the early implementation of BS-VI norms will help curb vehicular pollution in India.

What is Quadricycle Vehicle verification?

What are the new notified norms?

What is the WMTC cycle? 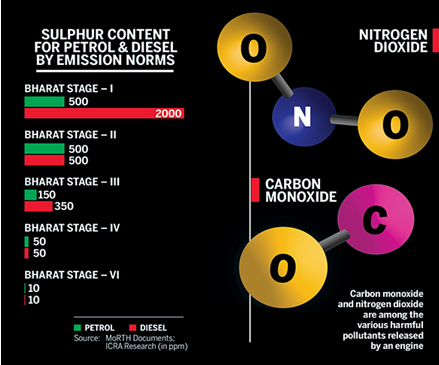 Oil marketing companies have informed that there will definitely be a marginal increase in retail prices of the fuels from April 1. Starting April 1, Bharat Stage (BS) VI emission norms come into force. This will be an upgrade on the currently prevalent BS-IV and BS-III norms.

Why rise in Oil prices?

How is BS-VI fuel different from BS-IV fuel?

How will things change with the new fuels?

History of BS norms in India

How is BS VI Different from BS IV?

Bharat Emission Standards – Everything that you want to know

This policy is inline with our commitments at Paris Climate Change Conference as well as public sentiments against rising air pollution in the cities, especially metros.

These are norms instituted by the Govt of India to regulate the output of air pollutants from internal combustion engine equipment, including motor vehicles.

What is current status of emission norms?

Currently, BS IV norms are applicable in 33 cities in which the required grade of fuel is available.

In rest of India, we are still following BS III standards.

Let’s see a little background of its implementation

1991– India introduced the emission norms for the first time.

1996– The norms saw some tightening as govt. asked most vehicle manufacturers to incorporate catalytic converters to cut exhaust emissions.
Govt. also notified fuel specifications based on environmental considerations, which were to be implemented by 2000.

2000– Govt. notified BS-I and BS-II standards, which were equivalent to Euro I and Euro II respectively. <BS-II was for the NCR and BS-I for the rest of India>

2005– BS-III and BS-II fuel quality norms came to be implemented. <BS-III for 13 major cities and BS-II for the rest of India>

2010– BS-IV and BS-III fuel quality norms were introduced. <BS-IV for 13 major cities and BS-III for the rest of India>

It works on a two-pronged strategy to control the air pollutant output.

Recently, govt had constituted an Expert Committee under the Chairmanship of Shri Soumitra Choudhuri, to draft Auto Fuel Vision and Policy 2025.

It presents the road map for auto fuel quality till 2025 for the country,taking into account the achievement under the last Auto Fuel Policy, emission reduction of in use vehicles, growth of vehicles and the supply and availability of fuels.

BS-VI is equivalent to Euro VI. However, many western countries have already graduated to Euro VI.

But, India is following European emission norms with a time lag of  5 years.

What are the challenges in implementing BS VI norms?

Engine development firms have cited a technological challenge in implementing the changes.

They have cited that jumping directly to BS-VI norms would give them little time to design changes in their vehicles.

Why is it challenging for auto firms to implement it?

There are two critical components which needs a fitment in the engine. They would have to be adapted to India’s peculiar conditions, where running speeds are much lower than EU or US. Industry estimates of required investment to upgrade from BS-IV to BS-V are to the tune of Rs. 50000 crore.

There are questions about the ability of the oil marketing companies to quickly upgrade fuel quality from BS-III and BS-IV standards to BS-VI.

The objective of upgradation to higher emission norms is defeated, if the uniform fuel is not available across the country.<This has been seen in reduced efficacy of engines of BS-IV vehicles, while taking inter-state travel>