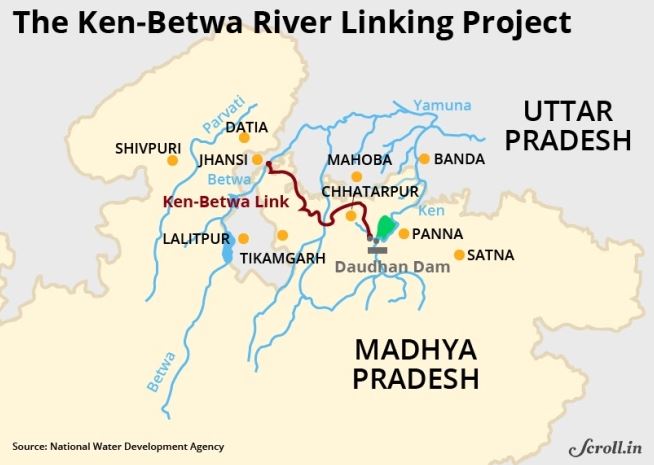 In the presence of PM and Jal Shakti Minister, the CMs of Madhya Pradesh and Uttar Pradesh have signed an agreement to implement the Ken Betwa Link Project (KBLP).

What is the Ken Betwa Link Project?

The Project has two phases:

What about the Panna tiger reserve?

Recent developments on the interlinking of rivers in India

Ken Betwa Link Project is one of the 16 river linking projects under the Peninsular component.

Clearances required for a river-linking project

Environmental organisations from across central and Eastern Europe have criticised a major project intending to link three rivers and provide seamless navigation between three of Europe’s peripheral seas, according to a statement. 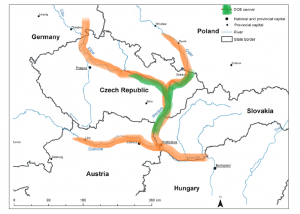 The Central government is working on the establishment of an exclusive body to implement projects for linking rivers.

One of the major concerns is that rivers change their course in 70–100 years and thus once they are linked, future change of course could create huge practical problems for the project.

A number of leading environmentalists are of the opinion that the project could be an ecological disaster. There would be a decrease in downstream flows resulting in reduction of fresh water inflows into the seas seriously jeopardizing aquatic life.

Possibility of new dams comes with the threat of large otherwise habitable or reserved land getting submerged under water or surface water. Fertile deltas will be under threat, with coastal erosion expected to threaten the land and livelihoods of local economies that support 160 million people.

As large strips of land might have to be converted to canals, a considerable population living in these areas must need to be rehabilitated to new areas.

On implementation, water discharge in 23 out of 29 rivers will reduce considerably, they say. The Ganga will see a 24% decrease in flow. Its tributaries Gandak (-68%) and Ghaghara (-55%) will be the worst affected. While the Brahmaputra will see only a 6% loss, its tributaries will see massive flow reductions: Manas (-73%), Sankosh (-72%) and Raidhak (-53%). Changes in water flow and trapping of silt in reservoirs will see a dip in the sediment deposited by rivers.

The draft Detailed Project Report (DPR) of the Godavari and Cauvery River Linking Project has been completed by National Water Development Agency (NWDA). 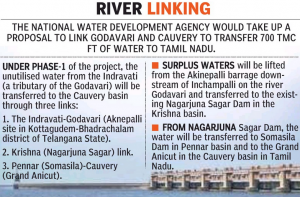 Benefits of the Project