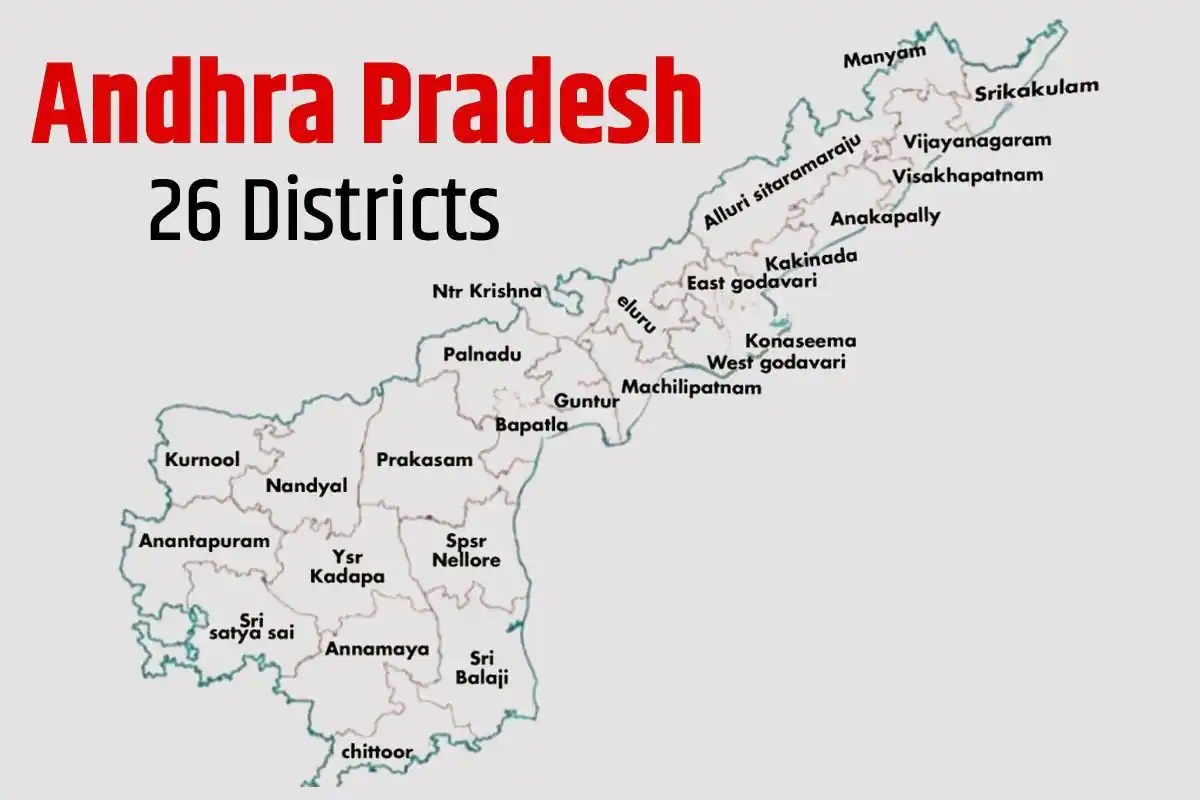 Andhra Pradesh has got a new map with the creation of 13 new districts, taking the number of total districts in the state to 26.

How are new districts carved?

How does it help?

Does the Central government have a role to play here? 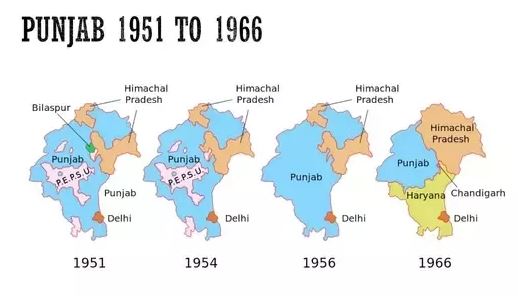 The newly elected Punjab Legislative Assembly passed a resolution, moved by the Chief Minister himself, on April 1 in a special session seeking the transfer of Chandigarh to Punjab.

With this, the ‘Chandigarh question’ has resurfaced, but this time it occupies the national spotlight.

Bifurcation of Punjab and Common Capital

What is the Chandigarh issue?

What is different this time?

What has been the position of the Union government on the city?

Is there a distinctive Chandigarh position? 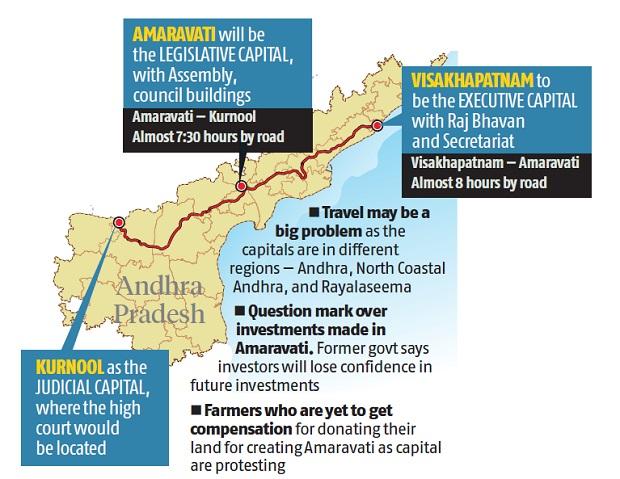 Why was it repealed?

Will Andhra Pradesh have only one capital now? 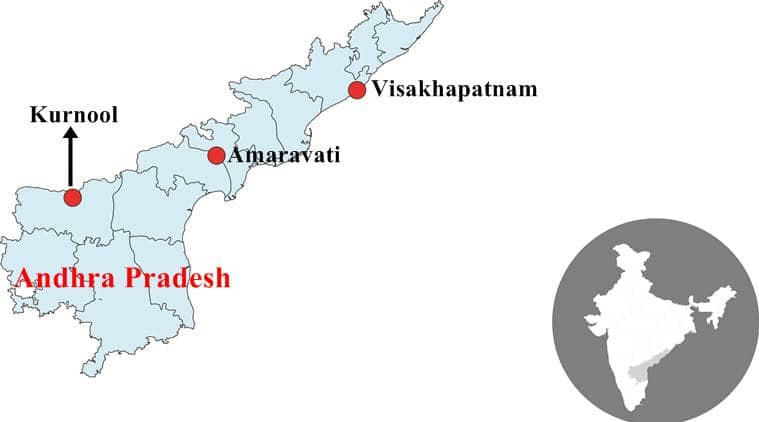 Reasons behind such considerations

Mains level : Nothing much

News
 The union government has revoked the ‘special status’ granted to Jammu and Kashmir by the Constitution.
 However, a range of “special provisions” for as many as 11 other states continue to be part of the Constitution.

Special Provisions but not special treatment
 All these provisions take into account the special circumstances of individual states, and lay down a wide range of specific safeguards that are deemed important for these states.
 In these range of Articles from 371 to 371J, Article 371I, which deals with Goa, stands out in the sense that it does not include any provision that can be deemed “special”.
 Article 371E, which deals with Andhra Pradesh and Telangana, too, is not that “special”.
 The special provisions laid down in Article 370 before it was modified were obviously much more farreaching than the special provisions for other states, described in Articles 371, 371A-H, and 371J.
The following special provisions are guaranteed by the Constitution to states
other than Jammu and Kashmir:
Maharashtra and Gujarat (Article 371)
The Governor has a “special responsibility”-
 To establish “separate development boards” for “Vidarbha, Marathwada, and the rest of Maharashtra”, and Saurashtra and Kutch in Gujarat;
 To ensure “equitable allocation of funds for developmental expenditure over the said areas”, and “equitable arrangement providing adequate facilities for technical education and vocational training, and adequate opportunities for employment” under the state government.

Nagaland (Article 371A, 13th Amendment Act, 1962)
 Parliament cannot legislate in matters of Naga religion or social practices, the Naga customary law and procedure, administration of civil and criminal justice involving decisions according to Naga customary law.
 Parliament also cannot intervene in ownership and transfer of land and its resources, without the concurrence of the Legislative Assembly of the state.

 This provision was inserted in the Constitution after a 16-point agreement between the Centre and the Naga People’s Convention in 1960, which led to the creation of Nagaland in 1963.
 Also, there is a provision for a 35-member Regional Council for Tuensang district, which elects the Tuensang members in the Assembly.
 A member from the Tuensang district is Minister for Tuensang Affairs. The Governor has the final say on all Tuensang-related matters.
Assam (Article 371B, 22nd Amendment Act, 1969)
 The President of India may provide for the constitution and functions of a committee of the state Assembly consisting of members elected from the tribal areas of the state.
Manipur (Article 371C, 27th Amendment Act, 1971)
 The President of India may provide for the constitution and functions of a committee of elected members from the Hill areas of the state in the Assembly, and entrust “special responsibility” to the Governor to ensure its proper functioning.
 The Governor has to file a report every year on this subject to the President.
Andhra Pradesh and Telangana (Article 371D, 32nd Amendment Act, 1973; substituted by the Andhra Pradesh Reorganization Act, 2014)
 The President must ensure “equitable opportunities and facilities” in “public employment and education to people from different parts of the state”.
 He may require the state government to organise “any class or classes of posts in a civil service of, or any class or classes of civil posts under, the State into different local cadres for different parts of the State”, and allot them.
 The President has similar powers vis-à-vis admissions in any university or state government-run educational institution.
 Also, he may provide for setting up of an administrative tribunal outside the jurisdiction of the High Court to deal with issues of appointment, allotment or promotion in state civil services.
 Article 371E allows for the establishment of a university in Andhra Pradesh by a law of Parliament. But this is not really a ‘special provision’ in the sense of the other provisions in this part of the Constitution.
Sikkim (Article 371F, 36th Amendment Act, 1975)
 The members of the Legislative Assembly of Sikkim shall elect the representative of Sikkim in the House of the People.
 To protect the rights and interests of various sections of the population of Sikkim, Parliament may provide for the number of seats in the Assembly, which may be filled only by candidates from those sections.
 The Governor shall have “special responsibility for peace and for an equitable arrangement for ensuring the social and economic advancement of different sections of the population”.
 All earlier laws in territories that formed Sikkim shall continue, and any adaptation or modification shall not be questioned in any court.
Mizoram (Article 371G, 53rd Amendment Act, 1986)
 This provision lays down that Parliament cannot make laws on “religious or social practices of the Mizos, Mizo customary law and procedure, administration of civil and criminal justice involving decisions according to Mizo customary law, ownership and transfer of land… unless the Legislative
Assembly… by a resolution so decides”.
Arunachal Pradesh (Article 371H, 55th Amendment Act, 1986)
 The Governor has a special responsibility with regard to law and order, and he shall, after consulting the Council of Ministers, exercise his individual judgment as to the action to be taken.
 Should a question arise over whether a particular matter is one in which the Governor is “required to act in the exercise of his individual judgment, the decision of the Governor in his discretion shall be final”, and “shall not be called in question”
Karnataka (Article 371J, 98th Amendment Act, 2012)
 There is a provision for the establishment of a separate development board for the Hyderabad-Karnataka region, the working of which will be reported annually to the Assembly.
 There shall be “equitable allocation of funds for developmental expenditure over the said region”, and “equitable opportunities and facilities” for people of this region in government jobs and education.
 An order can be made to provide for reservation “of a proportion” of seats and jobs in educational and vocational training institutions and state government organisations respectively in the Hyderabad-
Karnataka region for individuals who belong to that region by birth or domicile. 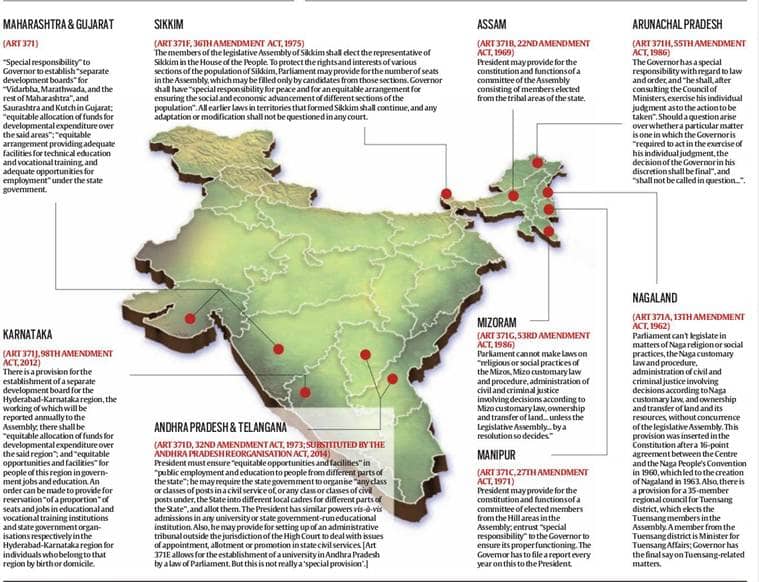 What is ‘Special Category’ status?

What benefits do states having ‘Special Category’ status enjoy?

Hence, special-category status catalyses the inflow of private investments and generates employment and additional revenue to state. Since centre bears 90% of state expenditure on all centrally-sponsored schemes, state can take more welfare-based schemes from the new savings.

Further, more grants from centre helps in building state infrastructure and social sector projects. As a result, special-category state gets to bridge its development deficit.

Who accords the category status to state and how?

Special Category’ status had been granted in the past by the Union government to States having certain characteristics based on the recommendations of the National Development Council.

iv) economic and infrastructure backwardness; and

Lacunas in the working of Special Category status

Why has the status been removed now?

The Finance Ministry’s reasoning for withdrawing the status is that the higher 42% devolution takes into account all needs of states.

Following the demand for Special Status by Bihar, a committee was appointed under Dr. Raghuram Rajan in 2013. This committee suggested that States classified as ‘Special Category States’ and those seeking inclusion in that category, would find that their need for funds and special attention more than adequately met by a basic allocation to each State and the categorisation of some as ‘least developed’.