Mains level : Paper 3- Issues with the RLRBSD scheme for discoms

The debt burden of discoms is estimated to touch 4.5 lakh crore by the end of 2020-21. This high level of debt underscores the need for reforms in the discoms. With this in view, RLRBSD has been launched by the Centre. The article highlights the issues with this scheme.

Analysing RLRBSD against the context of UDAY

3 factors that contribute to  debt of discoms

Consider the question “Why the discoms in India require frequent bail-outs? How far will the Reforms-Linked, Reforms-Based Scheme for Distribution be successful in addressing the woes of discoms?”

The problem is entirely political. In a bid to win elections almost every political party promises sops which include, among others, power supply to farmers and poor households at a throwaway price or even free. As long as this effect of populist politics persists, the discoms will continue to be in the red, needing a bailout at frequent intervals.

The Ministry of Power has for the first time laid down Rights to the Electricity Consumers through “Electricity (Rights of Consumers) Rules, 2020”.

Q.What are the new Rights to the Electricity Consumers as envisaged under Electricity (Rights of Consumers) Rules, 2020?

Rights to the Electricity Consumers: A highlight

Following key areas are covered in the Electricity (Rights of consumers) Rules:

(2) Release of new connection and modification in an existing connection

Part of the package announced by Finance Minister was a Rs 90,000-crore liquidity injection into power distribution companies (or discoms).

Why was this needed?

How do the DISCOMs work?

To understand how the sector works, we have to imagine a three-stage process.

Why there is a problem?

There are two fundamental problems here:

The Ministry of Power has issued a draft proposal for amendment of Electricity Act, 2003 in the form of the draft Electricity Act (Amendment) Bill, 2020.

Major amendments proposed in the Electricity Act are as follows:

Mains level : Paper 3-Indian power sector-Problems faced by the Discoms and their solutions.

Five years after the launch of UDAY, power-sector once again seems to be going deep into the troubles.

Where the Discoms stand now?

Components of UDAY and progress made

So is the idea of having a flat countrywide rate feasible?

In a welcome move, public sector companies NTPC and Power Grid Corporation of India have formed a joint venture to set up a national electricity distribution company.

Implications of this decision

1.Power Supply Chain – The decision paves the way for a central public sector entity to enter the power supply business, which up until now has been largely the preserve of state distribution companies.

2.Distribution – Coming at a time when state discoms are struggling to contain their losses, the move is likely to have far reaching ramifications for the distribution segment.

The move to create such an entity also signals the possibility of another round of reforms in power distribution,

Mains level : UDAY has not been Successful in achieving its aim.

Launched in November 2015, the Ujwal DISCOM Assurance Yojana (UDAY) was designed to turn around the precarious financial position of state distribution companies. But as the NDA government ends its term, indications are that the turnaround hasn’t materialised, with several targets being missed.

While the ACS-ARR gap was supposed to be eliminated by FY19, it remains as high as Rs 0.25 per unit. In many states, the gap is even higher. Part of the problem can be traced to inadequate tariff hikes. While it is true that some states have aggressively raised tariffs, the median hike remains muted. This is where political compulsions overtake commercial decisions.

Then there’s also the issue of whether the power subsidy released by state governments is adequate. As a result, discoms have reported financial losses to the tune of Rs 21,658 crore at the end of FY19, reversing the declining trend since the launch of UDAY, say reports.

Need for quick action – These issues need to be addressed quickly or else discom losses will rise further to levels where talks of another bailout are likely to surface.

More fiscal space with states – The only difference being that, this time around, state governments have little fiscal space to offer support.

Read more about UDAY Scheme at: 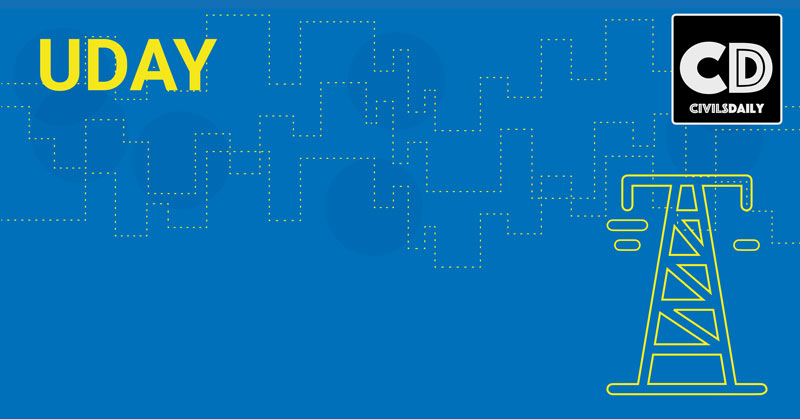 What is Ujjwal Discom Assurance Yojana?

UDAY provides for the financial turnaround and revival of Power Distribution companies (DISCOMs), and importantly also ensures a sustainable permanent solution to the problem. It has ambitious target of making all discoms profitable by 2018-19.

The scheme will ease the financial crunch faced by power distribution companies, that has impaired their ability to buy electricity.

It is based on the premise that it is states’ responsibility to ensure that discoms become financially viable.

How UDAY will revive Discoms?

It has all the 3 elements —

Why are these Discoms so stressed?

There are various reasons that lead to Discoms becoming unsustainable over the period of time.

Almost 25% T&D ( Transmission & Distribution) losses suffered by discoms. Remaining 75% is sold at a price much lower than discoms’ procurement costs. Wondering Why??

The most obvious reason is political interference, i.e. tariff is set by a group of largely political appointees.

Financially stressed DISCOMs are not able to supply adequate power at affordable rates, which hampers quality of life and overall economic growth and development.

What will be the impact of this scheme?

What are thrust areas of UDAY to turnaround discoms?

What could be potential challenge to UDAY?