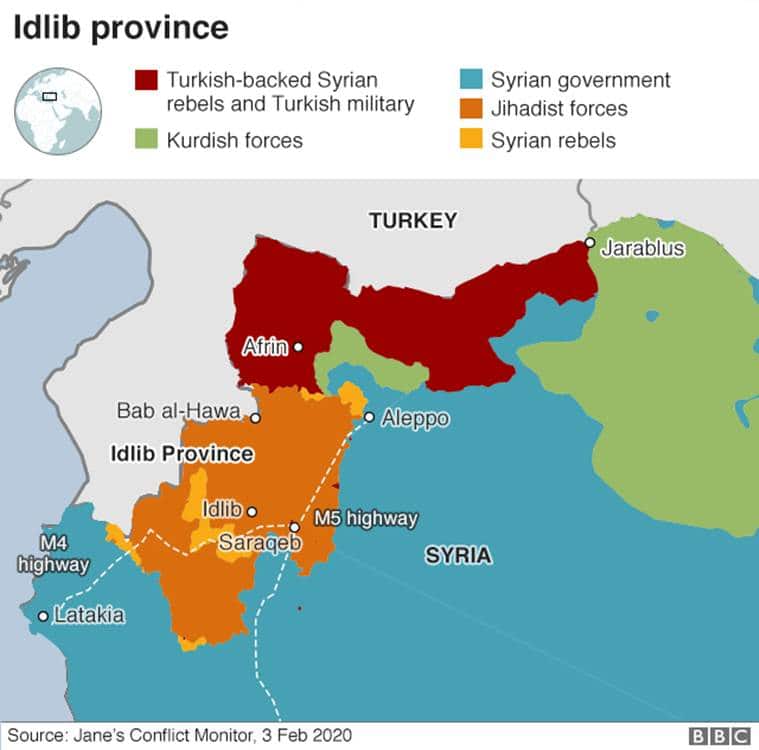 The nine-year-old war in Syria is currently raging in the northwestern province of Idlib, with rapidly escalating tensions between government forces of President Bashar al-Assad and the Turkish military.

Why is Idlib important?

Why is Idlib important for Turkey?

With West Asia Peace plan US plans to revive the stalled two-state talks between the Israelis and the Palestinians. Israeli PM Benjamin Netanyahu, who had earlier spoken against the two-state solution, has accepted the Trump plan.

The West Asia peace plan unveiled by U.S. President Trump seeks to give the Israelis what they have long wanted — an expansive state with Jerusalem as its “undivided capital” and tight security control over a future Palestinian state.

What’s the plan about?

Targeted killing of powerful Iranian Major-General could have done more bad than good for the U.S.

Series of events after the assassination

Prelims level : Nothing much.

The recent targeted killing of Commander of Quds Forces of the Iranian Revolutionary Guard Corps (IRGC) by the US raised the tension in the region to a new high level. The imminent blowback from Iran could have several consequences for the rest of the world including India.

Different from past killings

What could be the fallouts

Discuss: Remember the truce deal was signed between US & Russia?

This hopes the dialogue will help the country form a national unity govt.

Turkey’s decision to join the war against IS is based on the realization of IS threat on the backdrop of IS bombing of Turkish city, last month.

What exactly is this Syrian civil war?

To understand the conflict let us know the historical background of Syria. So, where is Syria?

That’s pretty complex! But UPSC is famous for asking about the details. What happened then?

In 1970, in another coup General Hafez al -Assad, the Minister of Defence seized the power.

The ascension of Bashar Al-Assad and the Shia-Sunni conflicts

Phew! That is a very complex history. What happened next that finally led to the war? It is important to cover the story comprehensively for an IAS Aspirant.

Then there were a few violation of human rights and eventually an uprising!

Wow, that escalated quickly. So how did the protests turn into an armed rebellion?

And that led to the formation of the Free Syrian Army

UPSC will probably grill you down to your guts on how this issue will complicate situation in the middle east. These are the current themes doing rounds as the news evolves and you need to keep a tab on these developments for the IAS Mains.