Mains level : Paper 2- What are the possibilities that could be brought in the world by the epidemic.

As COVID-19 spreads exponentially across the world, profound uncertainty and extreme volatility are wreaking havoc of a kind seldom encountered previously. It might, hence, be wise to start thinking of what next, if at least to try and handle a situation created by the most serious pandemic in recent centuries.

Impact on India and what lies ahead?

Possibility of the rise of digital authoritarianism

The pandemic even after it’s over could change the world in more than one ways and we must be cautious in our approach in accepting or rejecting these changes brought about by the epidemic.

The present COVID-19 outbreak has brought to light the old struggle between humans and viruses.

The constant struggle between humans and viruses

Steps involved in dealing with the virus

1. What is the RT-PCR technique?

2. How CRISPR is proving helpful in scaling up the testing?

3. Serological tests to detect the realistic information on the spread of the virus

Lockdowns are essential to control the disease but long-term strategies to deal with the disease would be based on the knowledge of its actual spread. The newly-developed point of care tests should be successfully able to bridge the existing gap in the testing of the virus. This will also assist in gearing up facilities to treat the severely sick as well as relieve and protect frontline health providers. Meanwhile, hopefully, efficient drugs therapies and efficacious vaccines against COVID-19 will also be discovered soon.

Mains level : Paper 3- Financial stress on the states and what centre should do to address the problem.

Concerned over the impact on their revenues, several state governments planned cuts in salaries of government employees.

Increase in the WMA limit will not address the issue

Mains level : 9 minutes light-out and its impact on grids

In his address to the nation, our PM has urged people across to turn off the lights in their homes for 9 minutes on April 5, starting at 9 pm. In response to this appeal, grid managers across states have flagged some risks.

Why is the 9-minute exercise a problem?

How does grid function normally?

What are the key areas of concern?

While the possibility of the grid tripping on account of this is highly unlikely, operators expect a “jerk”. While the system is generally planned for an outage of the single largest unit outage, there are two riders:

Why is this demand of significance in such a big grid? 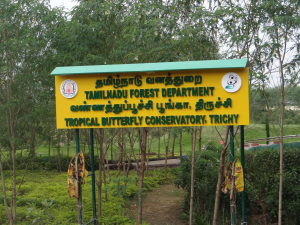 The Tropical Butterfly Conservatory Tiruchirappalli (TBCT) has been developed in Tamil Nadu’s Tiruchirappalli to create awareness among the public about the importance of the butterfly and its ecology.