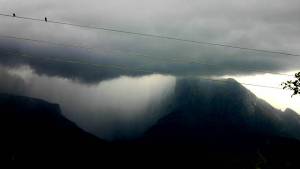 A cloudburst is an extreme amount of precipitation, sometimes with hail and thunder, which normally lasts no longer than a few minutes but is capable of creating flood conditions. Colloquially, the term cloudburst may be used to describe any sudden heavy, brief, and usually unforecastable rainfall. Rainfall rate equal to or greater than 100 mm (3.97 inches) per hour is a cloudburst. The associated convective cloud can extend up to a height of 15 km above the ground. During a cloudburst, more than 20 mm of rain may fall in a few minutes.

Where do cloudbursts can occur?

Cloudbursts do happen in plains as well, but there is a greater probability of them occurring in mountainous zones; it has to do with the terrain. Cloudbursts happen when saturated clouds are unable to produce rain because of the upward movement of very warm current of air. Raindrops, instead of dropping down, are carried upwards by the air current. New drops are formed and existing raindrops gain in size. After a point, the raindrops become too heavy for the cloud to hold on to, and they drop down together in a quick flash. It is not essential that cloudbursts occur only when a cloud clashes with a solid body like a mountain. One such cloud burst in the Himalayan region occurred when the monsoon winds were rising along the slope of the Himalayas and were sucked further by the ascending jet streams resulting in a very heavy downpour that caused devastating floods and landslides in June 2013. Cloudbursts can also occur when hot water vapour laden winds mix with the cold winds resulting in sudden condensation. Hilly terrains aid in heated air currents rising vertically upwards in two ways

2. Accompanying effect of Cloudbursts on terrain

The rainfall itself does not result in the death of people, though sometimes, the raindrops are big enough to hurt people in a sustained downpour. It is the consequences of such heavy rain, especially in the hilly terrain, that causes death and destruction.

There is a paucity of past data on cloudbursts; in addition, since only some of them get counted – only those that result in death and destruction – there is a problem of accuracy as well. But what is very clear is that events of extreme precipitation have been on the rise in the last few decades; keeping temperature fluctuations in mind as a trend, that cloudburst events might be on the increase as well.

The difficulty arises out of the fact that they take place over a very small area.

What can be forecasted is the spell of heavy rainfall due to convergence of many meteorological conditions.

Forecasts for a very small area can be done through the use of Doppler radars. Through them, it is possible to forecast the possibility of cloudbursts about six hours in advance, sometimes even 12-14 hours in advance.